Fight to the Death: Russia’s MiG-29 Can Take Out an F/A-18 Flighter 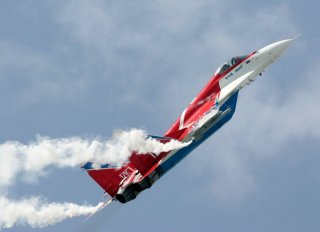 Here's What You Need to Remember: Thanks to these various updates, the Navy has been able to add thousands of hours to the expected life of the F-18s, while also greatly changing its combat envelope through technology adjustments.

The United States, Australia, Japan, and India are all teaming up to prepare for war against China in an upcoming Indo-Pacific joint training exercise intended to strengthen networking and combat effectiveness among the allies.

In one sense neither the MIG-29K or F-18 are likely to operate with an ability to compete against stealthy, 5th-gen Chinese J-20s or J-31s, yet to the extent that major warfare might extend over time, fleet size and advanced 4th-Gen attack systems could easily prove quite valuable, provided the Soviet-era and U.S. F-18s could network with one another and share information.

Kris Osborn is defense editor for the National Interest. Osborn previously served at the Pentagon as a Highly Qualified Expert with the Office of the Assistant Secretary of the Army—Acquisition, Logistics & Technology. Osborn has also worked as an anchor and on-air military specialist at national TV networks. He has appeared as a guest military expert on Fox News, MSNBC, The Military Channel, and The History Channel. He also has a Master's Degree in Comparative Literature from Columbia University. This article first appeared last year.