Fighter Jets Wanted: Why Switzerland Could Be the Next F-35 Buyer 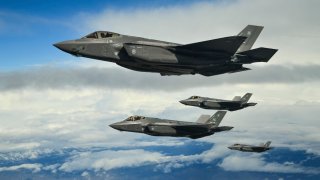 Here's What You Need to Remember: Also, not to be overlooked, any F-35 arrival in Switzerland will doubtless bring a significant economic impact upon the country’s economy through an infusion of jobs and possible technological sophistication in the world of aeronautics, weaponry and aviation, not to mention stealth. The Lockheed proposal seems well aware of this possibility, stating “should the F-35 be selected as the new fighter for Switzerland, this industrial work would take place in all Swiss regions...”

While it may not be known if competing Russian and Chinese fifth-generation planes actually rival an F-35 in terms of sensing, computing and attack technologies, it nevertheless is a reality which continues to inspire protective responses throughout the world.