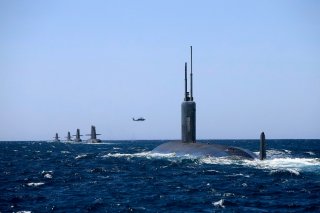 DARPA’s effort to track undersea life’s behavior as a means to detect enemy submarines has just entered its second phase. In the first phase, DARPA’s Persistent Aquatic Living Sensors (PALS) program sought to prove that sea life would respond to the presence of a submarine in a measurable way. With that seemingly confirmed, the second stage of the program will focus on developing sensors that can identify that behavior and relay a warning back to manned locations aboard a ship or onshore.

While the science is complex, the premise behind the PALS program is fairly simple. Undersea life tends to behave in a certain way when it senses the presence of a large and foreign object like a submarine. By broadly tracking the behavior of sea life, PALS aims to measure and interpret that behavior to make educated guesses about what must be causing it. In other words, by constantly tracking the behavior of nearby wildlife, PALS sensors can notice a significant change, compare it to a library of known behaviors, and predict a cause… like an enemy submarine, even if a submarine was stealthy enough to otherwise evade detection.

“Because marine organisms are ubiquitous in their environments, self-replicating, and largely self-sustaining, sensing systems that use marine organisms as their foundation would be discreet, cost-effective, and provide persistent undersea surveillance with a minimal logistical footprint.”

Encroaching enemy submarines are extremely difficult to detect, even with modern surveillance technology. The ocean is vast, and even America’s massive Navy can’t hope to police all of it. The U.S. Navy is currently developing crewless surface ships in a variety of forms, including the ACTUV Sea Hunter that will eventually be tasked with hunting submarines in its own right — but even with a fleet of drone ships, the Navy will still need highly effective underwater sensors to catch the attention of these vessels. DARPA’s PALS program would theoretically leverage existing wildlife to that end.

“Naval Undersea Warfare Center – Newport Division is a government partner on the program, using an ecosystem approach to determine if an unmanned underwater vehicle has passed by a reef.”

The Pentagon recently released a map showing the travel paths of Russian and Chinese naval vessels, alongside important undersea cables, as a part of its 2021 National Defense Authorization Act request, commonly referred to as the DoD’s budget. The map clearly shows the heavy traffic in both The Atlantic and Pacific oceans, with Russian subs encroaching on America’s eastern seaboard and Chinese submarines creeping up in the west.

“Our new reality is that when our sailors toss the lines over and set sail, they can expect to be operating in a contested space once they leave Norfolk,” U.S. Navy Vice Admiral Andrew “Woody” Lewis said earlier this year.

The threat posed by Russia’s submarines, in particular, seems to have prompted the U.S. Navy to re-establish its Second Fleet tasked with Atlantic defense. In March of 2018, Russian officials announced that they had successfully sent a fleet of nuclear attack submarines to America’s Eastern Seaboard. According to their claims, several submarines took up positions 12 miles off the coast of American military installations, remained there undetected, and then sailed back home.

“This mission has been accomplished, the submarines showed up in the set location in the ocean and returned to base,” the commander of the submarine squadron, Sergey Starshinov, was quoted as saying at the time.

The United States did not formally respond to these claims, and with good reason. If the United States were to refute Russia’s submarine-based boasting, Russia could easily claim that the U.S.’ submarine defenses are simply too ineffective to spot them as they approach. If the U.S. instead announced that they were aware of the submarines and tracked them throughout, it would prompt the Russian Navy to find ways to circumvent the form of detection America did leverage. Instead, in what seemed to be a direct response to Russia’s claims, the U.S. Navy brought the Second Fleet out of proverbial mothballs and tasked it with policing the very body of water Russia claimed to dominate with its nuclear submarines.

This article was originally published by Sandboxx on 10/28/2020.