Five Dead Superweapons That Almost Transformed How We Fight 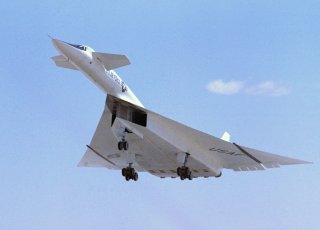 The USN tried the concept with the helicopter carrier USS Guam for a couple of years, adding Harrier fighters to its complement of choppers. Eventually, however, the Navy decided that the expense of the new ships, and the risk that they might cut into resources dedicated to supercarriers, were too great, and nixed the idea.

Eventually, the big amphibious ships of the Tarawa and Wasp classes would take over the sea control role. In effect, the USN acquired Sea Control Ships, although we call them amphibious assault ships and delegate to them a broader array of tasks. We also rely on other countries to build small carriers to fulfill the missions envisioned by the SCS; many of the flattops operated by the United Kingdom, Spain, Italy, and Japan essentially fulfill an SCS role.

Pursuit of the Sea Control Ship would obviously have led to a different naval force structure, as well as changes in the composition of naval aviation. The biggest difference, however, might have been conceptual; the Sea Control Ship might have changed the way we think about how naval aviation contributes to international security. The ability of small carriers to contribute to a variety of different missions and needs might draw us away from the (if incorrectly applied) Mahanian conception of naval power to a more Corbettian “dispersal” concept. And at a time when even strong advocates of the modern CVN have begun to buckle under the enormous cost of the great ships, the SCS might have offered a different way of approaching the projection of naval power.

Technology undoubtedly matters, but only rarely in the sense that an isolated technological achievement lends decisive advantage in tactical engagements. Rather, technological innovations and choices shape the ways in which military organizations, and the broader defense-industrial complex, approach the prospect of war. Each of these systems involved a radical rethink of organizational roles and priorities, and the cancelation of each left huge holes in capabilities, holes that continue to be filled in novel ways.