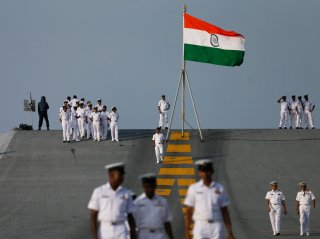 China would fear the Kolkata class because it would provide air defense for ships such as the Vikramaditya. Armed with 16 BrahMos missiles, the Kolkatas could also operate independently as commerce raiders, threatening Chinese shipping.

Although India has maintained a nuclear arsenal for decades, it has lacked a credible second-strike countervalue capability. The ability to threaten enemy strategic assets and even cities, an insurance policy against surprise nuclear attack, has eluded India. INS Arihant (“Destroyer of Enemies”) is the first real step toward fixing that problem. India is only the sixth country in the world to develop an undersea nuclear deterrent.

China should not fear the Arihant per se—India has a “no first use” nuclear policy, meaning it would not be the first to launch nuclear missiles. Even if that policy were to change, a successful Arihant class would only mean about twelve nuclear missiles at sea. Still, those twelve missiles represent the capability to do the unthinkable, and despite stated policy that such a potential threat be taken lightly.