Flattop Failure: These Aircraft Carriers Are Total Pieces of Junk 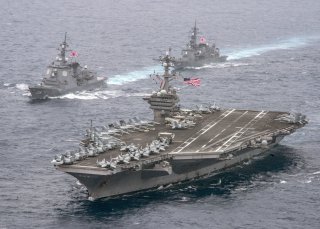 Here's What You Need to Remember: Renamed Vikramaditya, the flattop was due to enter service in 2008. But the poorly-managed Russian shipyard was overwhelmed by the scale of the refit. The cost doubled and trials were bumped back to September 2012. And when the crew pushed the conventionally-powered ship to her theoretical top speed of 32 knots, her boilers overheated.

Imposing, flexible, able to sail fast and launch devastating airstrikes at long range, aircraft carriers are the ultimate expression of national power. And many of the world’s best-armed countries are acquiring them. China, Russia, India, Brazil, the U.K., France, America.

But just getting your hands on a flattop is hardly enough. For every example of a country that succeeds in deploying a functional carrier and matching air wing, there’s a counter-example: a flattop hobbled by mechanical problems, stricken by age, sidelined by bad design or stuck with warplanes that simply don’t work.

What follows are not the success stories. They are the case studies in flattop failure … and object lessons for all the countries building aircraft carriers today.

The Admiral Kuznetsov, Russia’s only aircraft carrier, was launched in 1985 and joined the fleet in 1991. Since then the 55,000-ton, fossil-fuel-powered flattop has managed just four frontline deployments—all of them to the Mediterranean, and all of them just a few months in duration.

By contrast, American flattops typically deploy for at least six months every two years. The nuclear-powered USS Enterprise, commissioned in 1962, completed 25 deployments before leaving service in 2012.

One of Admiral Kuznetsov’s major problems is her powerplant. The vessel is powered by steam turbines and turbo-pressurized boilers that Defense Industry Daily generously described as “defective.” Anticipating breakdowns, large ocean-going tugs accompany Admiral Kuznetsov whenever she deploys.

Poor maintenance makes life difficult and dangerous for Admiral Kuznetsov’s 1,900 sailors. A short circuit started a fire off Turkey in 2009 that killed one seaman.

Her pipes are bad. “When it’s this cold, water freezes everywhere including pipes which may cause a rupture,” English Russia reported. “To prevent this, they just don’t supply almost 60 percent of the cabins with water (neither in winter nor in summer). The situation with latrines is just as bad. The ship has over 50 latrines but half of them are closed.”

Almost 2,000 men. Twenty-five latrines. Do the math. Training and morale are so poor that in 2009 Admiral Kuznetsov sailors apparently botched an at-sea refueling, spilling hundreds of tons of fuel into the Irish Sea.

And even when the ship functions as intended, her design limits her utility. Admiral Kuzentsov does not have steam catapults like American flatttops do. Instead, her Sukhoi fighters launch into the air off a bow ramp. The fighters must stay light, meaning they can carry only a few air-to-air missiles and a partial fuel load. Their patrol endurance is measured in minutes rather than hours.

Moscow appreciates its flattop problem and has vague plans to replace Admiral Kuznetsov sometime in the 2020s, by which time planners can realistically expect to have deployed the decrepit old lady maybe two or three more times.

But the Russians promised us she would work

Admiral Kuznetsov’s ill repute did not deter the Indian and Chinese governments from acquiring second-hand Russian carriers. China’s Liaoning, a rebuilt sister ship of Admiral Kuznetsov, began limited testing in the summer of 2012, serving a mostly educational role while a Chinese shipyard slowly built a new carrier from scratch.

Outfitted with the same faulty powerplant and performance-limiting bow ramp, Liaoning is unlikely to venture far from shore or send her lightly-loaded J-15 fighters—copies of Russian Sukhois—into serious combat. In a rare pique, Chinese state media denounced the J-15s as “flopping fish.”

India’s experience has been even worse. In 2004 New Delhi inked a $1.5-billion deal for the 1982-vintage Russian flattop Admiral Gorshkov. In Russian service, the 45,000-ton vessel had carried a few helicopters and small Yakovlev jump jets; the Indians paid to have the flight deck expanded and a bow ramp fitted to accommodate up to 16 MiG-29 fighters.

“India didn’t want to use asbestos as heat protection for the boilers,” Defense Industry Daily explained. “Instead, the boilers’ designer had to use firebrick ceramics. Which, as we see, didn’t work so well. Especially on a ship that Russia put up for sale in 1994, after a boiler room explosion.” Our emphasis.

More repairs. More delays. More money. “The problems revealed during sea trials last year have been fixed,” Russian Deputy Prime Minister Dmitry Rogozin vowed in late 2013, by which point Vikramaditya was expected to enter active service in India in the spring of 2014.

“Active service” being a relative term. If Russia’s own experience with its crappy carriers is any indication, the Indian ship will spend most of her time in port being repaired between brief forays into near waters. New Delhi is building a new carrier from scratch that should eventually complement the Russian hand-me-down.

Not all bad aircraft carriers are Russian. The U.K. and France have both sold to poorer navies decommissioned flattops that probably should have been permanently retired. In 2000 the Brazilian navy acquired the former Foch from Paris for $12 million.

Commissioned into French service in 1963, the 33,000-ton, non-nuclear Foch carried 40 fighters and helicopters. Unlike Russian flattops, Foch had a steam catapult, allowing her to boost heavily-laden planes off her deck.

The Brazilians renamed her Sao Paulo and, for the first four years, busily sailed the second-hand vessel in a series of regional exercises—practicing with her upgraded A-4 fighters, sailing with the American carrier USS Ronald Reagan and even qualifying Argentinian planes for deck operations. Sao Paulo was, and remains, Latin America’s only aircraft carrier.

But her age began to show, despite Brazil spending an additional $100 million on upkeep. On-board fires in 2005 and 2012 killed two sailors and left the flattop “barely functioning beyond flag-flying and light duties,” according to Warships International Fleet Review. “The Brazilian defense ministry admitted the ship’s effectiveness is extremely limited.” Today the A-4s rarely fly.

Sao Paulo’s replacement is still in the planning stages: a brand-new carrier to enter service sometime in the 2020s, around the same time that Russia, China, and India all hope to have new and better—that is to say, safe and functional—flattops of their own.