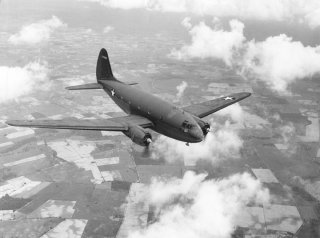 Few people appreciate it today, but for a period of more than three years during World War II, a force of mostly American airmen undertook one of history’s most complex — and deadliest — logistical operations, flying thousands of tons of supplies from India over the Himalayas into China in rickety, under-powered cargo planes.

These flights over “the Hump” were indispensable to China’s war effort against the Japanese, and thus a major factor in the Allies’ ultimate victory.

But at a tremendous cost. No fewer than 700 Allied planes crashed or got shot down and 1,200 airmen died. “Every 340 tons delivered cost the life of a pilot,” historian Francis Pike writes in his exhaustive new history Hirohito’s War: The Pacific War, 1941–1945.

Within a few months after bombing Pearl Harbor in December 1941, the armies of Imperial Japan occupied a swath of Asia extending from China and Korea south into Burma and what is now Indonesia, eastward all the way to isolated islands in the middle of the Pacific.

Tokyo’s march seemed inexorable. And Japan’s expansion might have been much, much more aggressive if not for the valiant and bloody resistance that Chinese generalissimo Chiang Kai-shek and his fighters offered up in the portions of their country the Japanese did not fully control.

Chiang’s soldiers tied up no fewer than 1.5 million of Tokyo’s own troops, Pike asserts in his dense new tome, which at nearly a thousand pages defies conventional review. But the Chinese were strapped for weapons, ammo and supplies. The Allies — and America, in particular — were desperate to keep China fighting and, by extension, keep Japan bogged down.

As Pike explains, prior to May 1942 the Allies maintained a land route from India through Burma into China. But Tokyo’s conquest of Burma shifted the burden of supplying Chiang’s forces to a contingent of initially just 25 planes — a mix of Douglas DC-3s, C-39s, C-47s and C-53s that was wholly inadequate for the mission’s demands.

“When fully loaded, Douglas DC-3s could not climb high enough to clear all the peaks and were forced to weave a perilous path through the mountains, a task that was virtually impossible when the treacherous Himalayan weather closed in,” Pike writes.

Turbulence could force a plane to drop thousands of feet in mere seconds. “Flight operations were a pilot’s nightmare,” according to the Air Force.

Planes crashed. Japanese fighters shot down others. In April 1943 the U.S. Army Air Corps rushed the bigger and more powerful Curtis-Wright C-46 into production to help out with Hump ops, but the new plane’s engines had a tendency to ice up. “The bugs were worked out over the Hump,” Pike quotes one pilot as explaining.

By the end of 1943, the Allies’ Air Transport Command had 142 transports and five crews for each plane. ATC eventually swelled to 700 planes supported by 84,000 military personnel flying 1,000 miles round trip delivering up to 10,000 tons of supplies a month, “with a plane crossing the Hump every two minutes,” according to Pike.

Granted, the airplanes and aircrews were just part of what was, in fact, an unbelievably vast effort, also involving cargo ships that deposited supplies in Calcutta and trains that hauled the materiel to the airfields — not to mention roughly two million Indian and Chinese laborers who built the airstrips in their respective countries by hand.

But the aircrews arguably suffered the most of all the people involved in the Hump operation. “There was an approximately one in three chance of being killed,” Pike writes — one of the worst wartime survival rates ever. Of the 700 planes that went down trying to cross the Hump between 1942 and 1945, some 500 remain missing more than 70 years later.

This article first appeared on War is Boring.