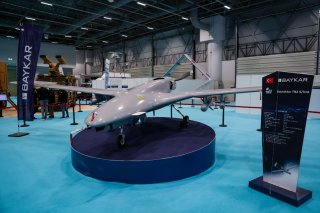 Here's What You Need to Remember: With such capabilities, Lancet drones could potentially make it unsafe for Ukrainian TB2s to operate in separatist-controlled Donbass airspace. ZALA says that these minefields can be maintained for “tens of hours,” but the Lancet drone only has an endurance of forty minutes before it needs recharging.

Dubbed the “flying Kalashnikov,” the versatile Lancet drone is one of the latest additions to Russia’s rapidly expanding unmanned aerial vehicle (UAV) arsenal.

News first emerged in late 2020 that Ukraine seeks to procure as many as forty-eight Turkish Bayraktar TB2 drones. Ukraine’s military reportedly flew its first TB2 drone on a reconnaissance mission over the breakaway region of Donbass earlier this month, prompting outrage from the Kremlin. “Obviously, there can hardly be anything to rejoice about given that Turkish drones, as the story goes, are surfacing somewhere in Donbass,” said Russia’s Deputy Foreign Minister Sergei Ryabkov.

Moscow’s concern is not entirely misplaced. Turkish TB2’s earned a track record of effective performance against Russian Pantsir-S1 air defense systems, destroying at least twenty-three such units in Libya and Syria. It is widely believed that these same Pantsir systems are being operated on the side of the Russian-backed separatist forces in the Donetsk and Luhansk People’s Republics.

It is in this context that Vesti Nedeli, one of Russia’s leading cable news shows, promoted a recent Russian effort to counter Ukrainian power projection capabilities in the Donbass region: the Lancet-3 drone. “Ukraine bought Turkish Bayraktar TB2 drones. With twice the flight speed, Russia’s Lancet leaves the Bayraktar no chance [to respond],” said the Russian news presenter.

Lancet is a loitering munition, or “kamikaze,” drone, developed by the Kalashnikov subsidiary ZALA Aero Group. Sporting a unique cruciform-wing design, the Lancet drone has a range of 40 kilometers, a cruise speed of 110 kilometers per hour, and a maximum speed of 300 kilometers per hour. Lancet-3 has a slower cruise speed but substantially higher top speed than the competing Bayraktar TB2, according to the available data. The drone has a three-kilogram payload, with a maximum take-off weight of twelve kilograms.

Lancet’s flagship feature is its purported ability to create “aerial minefields.” Multiple Lancet UAVs can lay these minefields in tandem to deny enemy drones large swathes of airspace. With such capabilities, Lancet drones could potentially make it unsafe for Ukrainian TB2s to operate in separatist-controlled Donbass airspace. ZALA says that these minefields can be maintained for “tens of hours,” but the Lancet drone only has an endurance of forty minutes before it needs recharging. Presumably, these prolonged area denial periods can be achieved through multiple, continuously rotating Lancet squadrons.

The “flying Kalashnikov” moniker is partly a reference to ZALA’s parent company, but it also reflects the manufacturer’s commitment to a versatile design philosophy. Russian defense industry insiders recently confirmed that the Lancet-3 drones underwent extensive field tests in Syria. “Last year, an experimental batch of Kalashnikov-made Lancet drones was delivered for testing in combat conditions. Dozens of terrorist positions have already been subject to high-precision strikes with the help of these drones. The new [drone] system has shown itself to be highly effective.” The source added that Russia’s Armed Forces are still studying ways to maximize the new drone’s effectiveness. Vesti Nedeli showed purported footage of the Lancet drone striking militant encampments and vehicles, partly taken with the drone’s onboard sensors.

Beyond the immediate threat that it poses to Ukraine’s recently-procured Bayraktar TB2s, the Lancet drone represents a significant technical milestone in Russia’s ongoing efforts to catch up with its U.S. and Israeli competitors in modern combat drone technology.