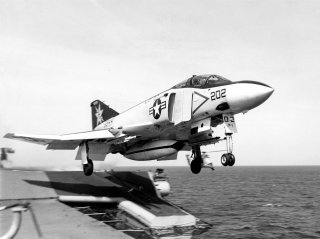 Here's What You Need to Remember: Of all mankind’s works of destruction, jet fighters tend to be the most aesthetically elegant, whether the compact grace of an F-16 or the slender symmetry of a French Mirage 5. The Phantom was as aesthetic as putting wings on an elephant

There is no particular reason for the world’s love affair with the F-4 Phantom.