Forged in War: The U.S. Navy SEALs Fought Hard in the Korean War 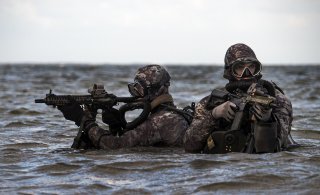 Here's What You Need to Remember: North Koreans flooded the southern part of the Korean Peninsula and threatened to ignite World War Three in 1950. As the U.S. and the United Nations quickly assembled a coalition, the Underwater Demolition Teams were one of the first in.

The end of World War Two came with a great downsize for the U.S. military. The Soviet Union was still seen as the ally that had helped defeat Nazi Germany, and many Americans revered the sacrifices of the Russians, who lost more than 20 million troops and civilians in the fight against Nazism.

Consequently, there was no need for a huge peacetime military, and each service began cutting down troops and projects. In the Navy, the different naval special operations units, a very small portion of the service, had performed admirably but were now on the chopping block.

Despite arguments from within the Navy to disband the special operations units, a consolidation took place. During the war, the Navy had established several commando units, the most notable being the Underwater Demolition Teams, the Special Mission Naval Demolition Unit, Amphibious Scouts and Raiders, the Underwater Demolition Project, and the Naval Combat Demolition Units. These units often had overlapping skill sets and mission sets. Some had been created for specific missions and were disbanded after their completion.

Four UDTs and approximately 200 frogmen survived the budgetary and manpower cuts. UDTs 1 and 3 were based in Coronado, California, while UDTs 2 and 4 were headquartered in Little Creek, Virginia—this disposition of odd and even-numbered teams depending on the coast (West, odd; East, even) remains in place today. SEAL Teams 1, 3, 5, and 7 are located in Coronado, and SEAL Teams 2, 4, 8, and 10 operate out of Little Creek.

Related: NAVY SEALs VS ARMY RANGERS, WHO IS BETTER?

The four remaining UDTs continued their training in peacetime and sometimes undertook special missions. In 1946, for example, UDT frogmen operated the drone boats that went in to collect water samples from the Bikini Atoll following a series of nuclear bomb testing.

Then, in June 1950, North Koreans flooded the southern part of the Korean Peninsula and threatened to ignite World War Three. As the U.S. and the United Nations quickly assembled a coalition, the Underwater Demolition Teams were one of the first in.

When war broke out, a UDT detachment was in Japan, training with the Army. The first special operation mission of the war fell on them.

On the night of August 5, a small detachment of UDT frogmen deployed from a Navy ship and inserted into Korea on inflatable boats to destroy enemy train tracks and a bridge. Before the main element reached the beach, two commandos swam in to conduct a close-target reconnaissance when they came upon a patrol of North Korean infantry. In the ensuing fight, the two frogmen were able to disengage, suffering one lightly wounded.

The mission might have been a failure, but it was also a light-bulb moment for the Naval Special Warfare community: the UDTs could do more than just reconnoiter beaches and destroy obstacles.

More frogmen arrived in Korea, and the UDTs focused on special reconnaissance, unconventional warfare, sabotage, and combat search and rescue operations. Their main targets were transportation hubs, bridges, and tunnels in an attempt to stall the North Korean advance and frustrate the enemy’s logistics.

Related: SDVs: THE SECRET WEAPON OF THE NAVY SEAL TEAMS

At least two platoons of 30 men each would be stationed onboard Navy ships at all times, usually, for a month; some teams were also positioned in small islands close to the Korean coasts. This forward-deployed capability allowed commanders to have a ready force to conduct sabotage or reconnaissance operations. UDTs would average between 10 to 20 missions during these short deployments.

UDT frogmen went in light. Submachine guns, pistols, knives, and grenades made up most of their weaponry, while for their explosive work they preferred the Mark 135 Demolition Pack, a 20-pound package of C-3 plastic explosives. When placed on the right spot, the Mark 135 could be devastating.

Soon afterward their first mission, UDT frogmen participated in Operation Chromite, the daring amphibious landing at Inchon that saved the day and drove the North Koreans back. Planned and led by General Douglas MacArthur, the landings at Inchon struck on the exposed flanks of the Communist forces, which by that point had squeezed U.S. and U.N. forces into a small perimeter in Pusan in the South. The Inchon Landings reversed the course of the war, forcing the North Koreans to retreat.

Related: LETTERS IN THE FORGOTTEN WAR: MEMORIES OF MAIL ON THE FRONT LINES OF KOREA

Frogmen from UDT 1 and UDT 3 were the first on the shore, conducting the necessary tasks, such as hydrographic reconnaissance and clearing minefields, to ensure that the approaching Allied armada was successful. The amphibious landings were a success, but the UDTs continued their mine-clearing work.

In October 1950, a month after the Inchon Landings, UDT frogmen rescued 25 sailors from two minesweepers that had been sunk by North Korean mines close to Wonsan Harbor. During this search-and-rescue operation, a frogman, William Giannotti, conducted the first UDT combat diver operation, when he swam down to one of the wrecks to mark it for destruction to prevent its classified codes from falling to enemy hands.

For the rest of the war, the UDTs continued to conduct raids, sabotage, and strategic reconnaissance operations. One of their more extraordinary missions was Operation Fishnet/Seanet, in which they went after North Korean fishing nets in order to starve the enemy army. The North Korean diet was based largely on fish and rice, and this gave the UDT frogmen a good opportunity to strike at the enemy logistics, thereby curtailing its fighting capabilities.

The Korean War was pivotal for the future of Naval Special Warfare. To begin with, the capability was condensed into one unit, the Underwater Demolition Teams. In addition, their mission sets expanded from strictly underwater demolitions, beach-clearing, and hydrographic reconnaissance to the direct action and unconventional warfare missions we’ve come to see as an intrinsic part of SEAL doctrine. This expansion in mission sets was both a result of the consolidation of units and of the operational environment of the Korean War, which encouraged special operations from off the coast, as key transportation and military targets were often within easy reach from the sea.

This shift in focus and mission sets positioned the Underwater Demolition Teams and its offspring, the Navy SEAL Teams, for success in the next big conflict that was looming right around the corner: Vietnam.

This article first appeared at Sandboxx News and is being republished due to reader interest.