Forget Confederate Statues: Should the Government Put Up Statues At All? 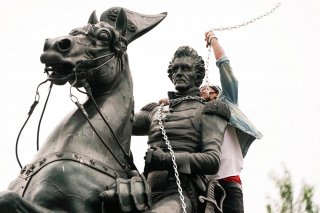 In response to the police killing of George Floyd, and to a resurgence of the Black Lives Matter movement, protesters across the country have recently removed or vandalized statues celebrating Confederate soldiers, founding fathers, and explorers. Some cities and states have preemptively removed or covered such statues to reduce the likelihood of conflict.

Those advocating for statue removal argue that honoring problematic historical figures is offensive to significant fractions of the citizenry, especially Blacks and other minorities. And many of the Confederate monuments being attacked were erected during the Jim Crow era, at moments of civil rights unrest.

Those opposing statue removal argue that these statues preserve history and should therefore remain. Opponents also raise questions about where to draw the line regarding which statues should come down, or not.

To resolve this debate, we should recognize that the statues in question were constructed by governments, at taxpayer expense, and typically reside on government land.

No good argument exists, however, for why governments should be in the “statue” or “history” business. Government interventions in the economy and society can sometimes make sense as responses to monopoly, or externalities (e.g., pollution), or insufficient provision of public goods (e.g., national defense). Even in such cases, governments often overreach, but at least advocates of intervention can suggest that private mechanisms, on their own, might not produce a good outcome.

None of the standard “market failures”, however, explains why governments need to build statues or any other kind of monument. Governments do so as a method of thought control, to nudge their citizens toward a particular view of the state. This is NOT a legitimate function of government.

So while vandalism aimed at statues is ill advised, the lawful removal of government statues and monuments is good policy because governments should never have erected them in the first place. These expensive public works projects have no legitimate public benefit but do have a major negative: offending or even oppressing the citizenry, minorities in particular.

This article by Jeffrey Miron and Erin Partin first appeared in CATO on July 9, 2020.