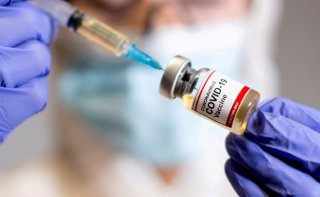 Here's What You Need to Know: There is still little question that the existing vaccines are effective at preventing the delta variant’s transmission.

Professor Sir Andrew Pollard, the head of the Oxford Vaccine Group in the UK, told Parliament in August that reaching herd immunity was “not a possibility” with the COVID-19 Delta variant.

Pollard compared the Delta variant unfavorably to measles, noting that, while measles could be prevented from transmission if ninety-five percent of Britons were vaccinated against it—the concept of “herd immunity” in action—the delta variant’s ability to infect vaccinated people means that idea of containing it via herd immunity  was “mythical.”

Unfortunately, Pollard continued, while the vaccines were effective at preventing the worst health effects from the coronavirus, there was no inoculation that could completely prevent the virus’s transmission.

Herd immunity is reliant on a large percentage of the population becoming immune to a disease’s transmission, either through vaccination or (in most cases) through prior exposure and survival. If most of the population is so protected, a buffer is created, providing indirect protection for otherwise unprotected people.

While many adults who have consciously chosen not to take the vaccine have been criticized for embracing conspiracy theories and endangering public health, not everyone who remains unvaccinated does so for purely personal reasons. Some people, for instance, are allergic to the compounds contained within the coronavirus vaccines, meaning that they rely on those around them to take it for protection.

There is little question that the existing vaccines are effective at preventing the delta variant’s transmission. A study conducted by Imperial College London concluded that unvaccinated adults were three times as likely to test positive for the virus after coming into contact with an infected person.

While many countries have continued to struggle with vaccine distributions, Britain’s has been one of the world’s most successful rollouts. By now, roughly three out of four British adults have received both shots. The government plans to offer booster shots to vulnerable groups, although some health officials remain unconvinced.

In the United States, over sixty percent of adults have received at least one shot, and more than half have been fully vaccinated. The vaccination rate, which increased quickly in the spring and early summer, has tapered off as vaccines find increasing resistance in some areas.

Rural and red-leaning states, in particular, have been slower to vaccinate, leading to consternation from some public officials. Alabama Governor Kay Ivey, for instance, was quoted in late July as saying that it was “time to start blaming the unvaccinated folks” for the state’s uptick in coronavirus cases.