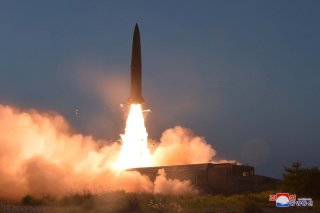 In the late 14th century, Korea’s ruling Joseon dynasty began an all-out espionage campaign to acquire classified missile technology from neighboring China. At the time, stateless wokou “dwarf pirates”—so called because of their comparatively shorter stature—were ravaging the Korean coast from bases in Japan. The Joseon dynasty sought effective artillery to serve as a deterrent.

China was then the global leader in gunpowder and rocket technology. However, early rockets were highly inaccurate and mostly useful for panicking the horses of enemy cavalry units. Furthermore, while the Joseon were nominally allied to Imperial China, the Chinese were not willing to transfer the gunpowder technology to their eastern neighbor.

So in 1377 the Korean government formed an Office of Gunpowder Weapons which began clandestinely smuggling classified documents and gunpowder samples out of the Middle Kingdom. This weapons program made a breakthrough when a Chinese merchant was bribed into passing over the formula for gunpowder. At the same time, Korean inventor Choe Mu-seon independently figured out how to synthesize gunpowder from the soil.

The wokou were finally eradicated when in 1419 a huge gun and rocket-armed Korean expeditionary fleet wiped out the pirates’ boats in a raid on Tsushima Island, Japan. Just prior to that, Yi Do and Choi Hae-san developed a deadly new missile system developed out of straightforward logic. If a lone hwajon fire rocket was unlikely to hit a target—why not fire dozens or hundreds at once?

The hwacha—“fire cart”—was one of the world’s first multiple rocket launcher system, following on the heels of similar but smaller-scale Chinese designs. The early model hwacha could unleash 50 rocket arrows at once—a number which increased to 100 in the Munjong-model developed in 1451.

The hwacha consisted of a two-wheel cart carrying a launchpad in which row upon row of firing slots were carved. Each slot could accommodate a 1.1-meter long singijeon “magical machine arrow” with a paper tube full of gunpowder near the arrow’s head. The projectiles were linked so that when the fuse was lit, they would all shoot off at their targets in a matter of seconds. Non-explosive arrows could also loaded, or up to 200 large-caliber bullets.

The oak or pine carriages and projectiles were easy to move on the battlefield compared to heavy cast iron artillery systems, and the crew of two to four could angle the rack up or down to adjust the range. Hwachas were generally effective at ranges of just 100 to 150 meters. Joseon tests showed the heavy arrows could pierce strait through shields and armor at that rage. However, when situated on elevated terrain and using lightweight ammunition, hwacha projectiles could reach up to 300 or 500 meters.

Several hwacha have been assembled and test fired in modern times. You can see just how terrifying the medieval multiple-rocket launchers were in the videos below.

Unlike many early gunpowder weapons intended to knock down fortified walls, the Hwacha instead was used as an anti-personnel weapon to defend them. The Joseon dynasty initially deployed 130 hwachas for the defense of Seoul and the northern border, where they were used in combat against the Jurchen nomadic tribes.

Hwachas were also installed on u-shaped Korean panokseon warships. These 70- to 100-foot vessels had flat keels for maneuverability in shallow coastal waters and raised gunnery decks, while rowers were protected in a largely enclosed mid-deck. The hwacha was light enough it could be re-positioned onto either the gunnery or rowing deck for an optimal firing angle.

In 1592, Japanese Daimyo Toyotomi Hideyoshi dispatched 158,000 men in a surprise invasion of Korea, leading to the Imjin Wars. Toyotomi’s objective was the conquest of China; however, the Korean Joseon dynasty had refused to allow the Japanese to pass through their territory. Landing in Pusan in southern Korea, Toyotomi’s troops swiftly overran Seoul and Pyongynag.

The Chinese Ming Dynasty didn’t fail to grasp Toyotomi’s intentions. A Chinese army linked up with the hard-pressed Joseon to push the samurai back out of Pyongyang. Meanwhile, the brilliant Korean admiral Yi Sun-sin employed a fleet of panokseon and heavily armored ‘turtle boats’ to disrupt the Japanese army’s maritime supply lines.

However, on Jan. 27, 1593 the Japanese defeated a Ming offensive to liberate Seoul at the Battle of Byeokjegwan. It was left to a much smaller Korean force to take back the capital.

Gen. Kwon Yul had earlier assembled an army behind the front lines that drove Japanese forces out of the Jeolla province in southwestern Korea. In February, he marched his 2,300 men north from Suwon and seized the ruins of an old fortress at Haengjiu. The strongpoint was only six miles northwest of Japanese-occupied Seoul, on the north bank of the Han River. Crucially, the steep-sloped hill could only be approached by land from the north, and had access to riverine resupply.

Around 700 reinforcements arrived, including militia under Kim Cheon Il, warrior monks led by Cheo Yong, and even civilian and female combatants from nearby communities. Over three days, Kwon quickly built up the defenses around Haengju, erecting an outer wooden palisade and a 10-foot earthen rampart outside the ancient walls. Along the wall he deployed archers, arquebus gunners, chongtong cannons, mortars and no fewer than 40 hwachas. There were also peculiar devices called the sucha sokpo — “water wheel rock cannons” — that used a spinning wheel to fling rocks at the enemy.

Meanwhile, an army of 30,000 samurai and ashigaru infantry mobilized in Seoul to seize Haengju. The samurai marched to battle in heavy armor wearing bestial facemasks to terrify their enemies. Many of the more lightly armed ashigaru accompanying them were equipped with arquebus matchlock muskets, a technology obtained a half-century earlier from Portuguese traders. They were led by ensemble cast of Japan’s best and brightest military leaders including Ukita Hideie, overall field commander of the Imjin campaign and adopted son of Toyotomi, as well as Kato Kiyomasa and Damien Kuroda Nagamasa.

The Japanese army arrived in three separate detachments on the morning of Feb. 12, 1593. Starting at six o’clock in the morning, the three senior Japanese commanders each led a separate assault on Haengju, one after another—but on each occasion, companies of closely-arrayed samurai warriors were decimated by clouds of arrows loosed by defending hwachas and archers. The defenders even threw tree trunks and boulder over the top of the wall and poured boiling oil and molten metal over the side. Local women carried heavy stones gathered in the fabric of their skirts up from the riverside to be flung at the invaders.

At noon, a fourth assault led by Ukita finally overran the wooden palisade on the outside of the fortress, though he was gravely wounded in the attempt. Now the Japanese infantry swept towards the inner wall of Haengju.

As fighting ground on into the afternoon, samurai nearly overran the warrior monks defending the western spur of the fortress. Kwon, who had been banging on his battle drum to pump up morale, cast his mallets aside, drew his sword and charged into the fray, helping drive the samurai from the ramparts.

But the arrow supply was beginning to run short. Once the defenders exhausted their ammunition, the larger Japanese army would surely swarm over the fortress walls with comparative ease.

As Ukita’s men prepared a final assault, two boats sailed up to the pier at the foot of the mountain fortress. The had been dispatched by commander Yi Bun, the nephew of Adm. Yi Sun-sin, and carried between them more than 10,000 arrows. The ammunition was hastily passed up to Kwon’s archers and meticulously loaded into the hwachas—then unleashed in a devastating storm.

By the evening, three senior Japanese commanders had been wounded by Korean missile fire in nine separate assaults. Lacking the supply lines for a prolonged siege, Ukita burned his dead—estimated to number around 1,000—and withdrew. Three months later, Seoul fell back into Korean hands. Kwon credited the firepower of the hwachas for repelling the Japanese assaults.

The Imjin wars would rage on for five more blood years, devastating much of Korea. Finally, at two in the morning on Dec. 16, 1598, Yi’s fleet creeped up on more than 500 Japanese ships stationed at Noryang Strait off the southern coast of Korea. Yi’s force consisted of only 63 Chines ships and 82 Korean panokseon armed with hwachas and domestically-built gunpowder weapons.

The allied ships raked the Japanese fleet with cannon balls, bullets and singijeon arrows. Japanese commander Shimazu Yoshihiro charged his more lightly armed vessels toward the sturdier Korean warships, seeking to overwhelm them with his musket fire and boarding actions. By dawn the Japanese fleet had lost more than half its ships to the mainlanders’ firepower and began to withdraw. Shimazu was left clinging to the mast of his sinking flagship until he was rescued by a passing vessel.