Forget Rifles, Computers And AI Are Making The Army Deadlier Than Ever 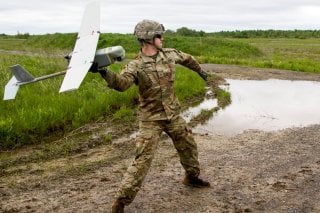 Here's What You Need To Remember: Soldier-worn computers will instantly connect target information, drone feeds and enemy tracking data - among other things. Computers and sensors are already being woven into soldier uniforms and being ergonomically engineered to accompany forces in battle for this specific purpose.

(Washington, D.C.) The age is fast emerging wherein forward-operating soldier sensors, weapons and networking technologies will all rely upon secure computing to perform most advanced combat tasks. While many elements of this scenario already exist in various forms, technology is progressing quickly to the point where virtually all combat systems will be cyber-reliant.

Soldier-worn computers will instantly connect target information, drone feeds and enemy tracking data - among other things. Computers and sensors are already being woven into soldier uniforms and being ergonomically engineered to accompany forces in battle for this specific purpose.

This presents a certain duality or paradox of great significance to future war; increased computing power, AI-enabled systems and advanced processing speeds promise to bring unprecedented advantages to combat operations - yet at the same time greater reliance upon computer networking requires sophisticated “hardening” and security technologies. Vulnerability to certain individual systems could increase if all technologies were connected to a central computer network, because an intruder would have wide-ranging access across a range of systems should initial hacking attempts be met with a measure of success.

Soldier wearable computers, embedded sensors, night vision goggles and wireless communications links will all require advanced security to succeed in combat. An entire platform of integrated systems cannot malfunction in the event that one “node” is hacked or disrupted.

With these problems in mind, many U.S. military and industry innovators are working on advanced, lightweight encryption technology designed secure computer systems and integrated networks operating at the edge of combat.

For instance, one recently patented technology from a firm called Encrypted Sensors is evolving an encryption technique intended to massively increase the security and efficiency of forward-operating cyber-reliant combat systems. The emerging technology, according to developers, embeds pre-programmed computer chips into the hardware itself, without needing to rely upon software for encryption. Called Field Programmable Gate Array (FPGA) technology, the quarter-sized chips are not operated like typical encryption programs which use software and Computer Processing Units (CPU) for control.

“Instead of having software control a computer chip, these FPGA chips control themselves in the hardware,” Brian Penny, Chief Technology Officer, Encrypted Sensors, told Warrior.

The concept, he added, is to insert random information much more frequently at “cut points” without having to insert data in large chunks at certain segmented intervals. This is intended to increase the security of the encryption by making it much more difficult to track or decode and also massively increase efficiency.

“Cutting up the binary words and inserting some random data inside the cut point. We are able to encrypt in real time very efficiently on military wearables. It does not eat up a lot of battery life or processing time,” Penny said.

When it comes to dismounted infantry operations, decreased computer processing and increased efficiency enables lower weight, transportable technology. Also, by virtue of not needing to rely upon software, these new encryption methods can connect multiple devices through one central hub. “Instead of having multiple devices you only have one access point,” Penny said.

Penny explained that encryption can become more effective when, as he said, “random” data is inserted between the “ones” and “zeros.”

“We send out fake data so it is hard to tell when the actual start or end of the message is. It is harder to hack. We are removing a layer of potential security flaws,” Penny said.

Encrypted Sensor’s work seeks to mitigate vulnerabilities which can be associated with standard methods of encryption which use larger “chunks” of data and rely upon mathematical formulas.

“A sensor is useless unless you get the data update quickly. What we are doing is not based on math but the actual physical nature of the ones and zeros moving through a binary stream,” Encrypted Sensor CEO Pat Hull, told Warrior. … “It is not algebraic.”

Hull explained that their techniques relies upon the technical means to vary the length of word and data streams and frequently insert extra words, letters, terms and symbols, among other things.

“The difference with us is we are working on a binary level as the data passes through the chip. We randomly add a one or a zero,” Hull said.

Using a non-mathematical technique for encryption may bring substantial security advantages, given the pace at which mathematically-oriented computer programs are able to keep pace with advanced algebraic algorithms and crack encryption.

The essay makes the point that mathematically-based methods of encryption might prove easier for adversaries to track and hack, given the extent to which computers can increasingly detect and decode mathematically-based algorithmic formulas. Encryption is, among other things, intended to ensure that no unsecured information can “exit the encryption engine,” the essay states. (Michael T. Kurdziel Ph.D., John J. Fitton).

“The best defense against proprietary cryptanalysis techniques is to be sure the algorithm is designed and implemented such that no unsecured information can exit the encryption engine. … due to the adversary’s skill level, it must also be assumed that all aspects of the design are compromised and that the adversary has become expert on the communication equipment and the algorithm design,” the essay states.

The goal of advanced encryption, the essay explains, is to ensure that “no signal correlated with unsecured information exists the device. No functional means should exist that allows unsecured data to be extracted once it has been input to the device,” the essay states.

Given this goal, it seems to make sense that adding more frequent "cut points" at which to insert random bits of data might make it more difficult for potentially unsecured data to "exit" the device or transmission.

Encrypted Sensors is now preparing for laboratory demonstrations of the technology and begun early prototyping. Part of this process will include third party validation.

Hull and Penny hope to present their technology as a potential solution for protecting the power grid and maintain that their encryption could withstand quantum computing attacks.

These encryption techniques, developers say, can be applied to “any digital system,” to include radio networks, computer systems and even drone video feeds.

It seems clear that whatever this patented FPGA encryption is able to accomplish, it will need to be upgradeable to sustain the test of time given the pace of technical advancements increasingly available to adversaries.

“Intellectual property or strategic military data may need to be secured for decades and therefore necessitate the use of an encryption solution that will endure against resources available to the adversary over that same time span,” the Harris essay states.