The Forgotten Naval War Between the U.S. And Iran 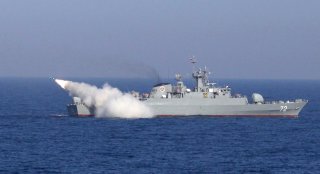 Here's What You Need To Remember:  It didn't take long for the two sides to come to blows.

The 1,500-ton Saam-class frigate was one of three built by Vosper in the UK for Iran during the 1970s and was armed with a rapid-firing 4.5” gun and Italian-built Sea Killer cruise missiles on a stern-mounted launcher (picture here).  Using an Iranian modification of the outdated Sea Killer called the Sea Dawn, the frigates had struck six Iraqi merchant ships in a five-month period in 1986-1987.

At 8 AM, Bravo approached within three miles of the Iranian oil platform Sassan, which was defended by four ZU-23 23-millimeter flak cannons and SA-7 surface-to-air missiles.

Each U.S attack proceeded as if by the rules of a 19th-century duel. The U.S. ships radioed to the Iranians their intent to destroy the platform and gave them five minutes to abandon ship. Most of the panicked crew fled on two tugs—but some stayed behind and manned the guns.

“At 0804, we told the inhabitants that their time was up and commenced firing at the gun emplacement. This was not a classic Naval Gun Fire Support mission; I had decided on airbursts over the GOSP [Gas Oil Separation Plant] to pin down personnel and destroy command-and-control antennae but to avoid holing potential helo landing surfaces.

Following further bombardment, at 9:25 Huey and CH-46 helicopters swooped over the burning platform and deposited two platoons of Marines via fast rope. In the next two hours, the leathernecks scooped up intelligence and rigged the platform with 1,500 pounds of explosives.  Seven minutes after the Marines lifted off, Sassan erupted in a massive explosion.

At ten minutes till noon, the cruiser Wainwright suddenly detected a vessel approaching.  This was the Iranian Joshan, a German-built La Commandante-class fast attack boat displaced a mere 234 tons, compared to the nearly 8,000 tons of the Wainwright. Joshan had just one Harpoon missile on her two twin-rail launchers and was under orders not to fire.

But where was the infamous Iranian frigate?  And did Tehran plan to counterattack?

The answer to these questions and the events of the frantic air-sea battle that unfolded that afternoon are detailed in a companion article.

Sébastien Roblin writes on the technical, historical, and political aspects of international security and conflict for publications including The National Interest, NBC News, Forbes.com, and War is Boring.  He holds a Master’s degree from Georgetown University and served with the Peace Corps in China.  You can follow his articles on Twitter. This article first appeared in 2019.