Fourth of July Fiasco: There's a Shortage of Fireworks 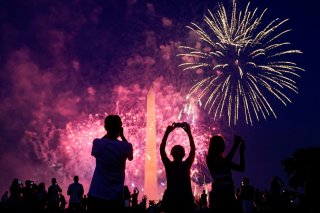 The United States’ emergence from the coronavirus pandemic has been accompanied by a series of unusual shortages and surpluses in the economy. There have been shortages of late of everything from lumber to gasoline to blood. Meanwhile, there’s a surplus of Girl Scout Cookies.

NBC News reported this week that the latest shortage is of fireworks — just in time for the biggest fireworks day of the year, July 4.

The network cited fireworks industry sources stating that fireworks supply is expected to be down thirty percent from 2020, due to “supply chain issues.”

In 2020, Americans imported around 255 million pounds of fireworks, generating sales of around $2 billion, with a shortfall of 76 million pounds expected.

The diminished supply has led to higher prices, as well as fireworks users having to mix and match from different sources. One fireworks operation in Wyoming recently posted a sign stating that they were closed, “due to product shortage.”

NBC also noted that there’s something unique about fireworks that has exacerbated the supply problems.

“Fireworks face unique shipping issues because only a handful of shipping lines currently accept them, the story said.  “Of them, only so many ships are available — and of those ships, only a limited portion of their cargo space can be allocated to material classified as hazardous, such as fireworks.”

Another expert told NBC that fireworks aren’t likely to be prioritized during the present crunch.

“Container capacity has been at a shortage for some time now. Couple that with the imbalance of vessels from the Suez Canal blockage — this has sent container pricing through the roof,” Glenn Koepke, SVP of Customer Success at FourKites logistics software company, told the network.

“Companies that have stable and committed volume with steamship lines are getting the service they need, where companies that have a very cyclical business with lumpiness in container demand are struggling to get capacity on vessels.”

However, NBC also notes that “shipping containers full of fireworks” are currently backed up in such places as Long Beach, California.

The TV station KTVO, in Lancaster, Pennsylvania, spoke to a specific vendor named Kim Martin about the shortage.

“We ordered seven containers, and we only got three in, and then it wasn't what we ordered,” Kim Martin, manager of Fire Palace in Lancaster, Missouri, told the TV station. “We just had to take whatever they could ship us because there weren't very many fireworks produced this year and not very many coming to the United States.”

"We were fortunate because we did get some containers, [and] our prices have been able to be cheaper than a lot of places,” Martin added. “Domestic stuff is always higher so that has been a problem too."