France Is Designing Its Next Generation Nuclear Missile Submarines 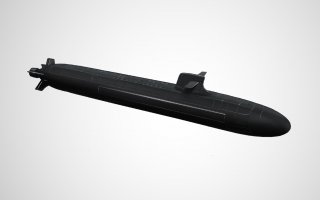 Here's What You Need to Know: The Triomphant-class is still young.

The SNLE 3G is estimated to be longer than the Triomphant-class. This additional length is likely for housing a larger and quieter nuclear reactor, rather than additional missiles. The Triomphant-class has space inside the hull for 16 M45 or M51 nuclear ballistic missiles arranged in two 8-silo groups aft of the sail. The SNLE 3G will probably be equipped with the M51 as well.

The SNLE 3G’s nuclear reactor is said to be a derivative of the reactor used on both the upcoming Barracuda-class, and the Charles de Gaulle aircraft carrier. In addition to on-board electronics, the reactor will power the SNLE 3G’s unique propulsion system—a pump-jet.

The UK-based Thales group will develop the SNLE 3G’s sonar. Thales also developed the older Rubis-class’ and the still-in-development Barracuda-class’ sonar. The SNLE 3G will likely have a bow sonar antenna, as well as dual flank arrays and a towed array, allowing the SNLE 3G to “see” in many directions simultaneously.

Like previous nuclear-powered ballistic missile submarines, the SNLE 3G class will like be berthed at the somewhat mysterious Île Longue in Frances’s north west. Île Longue is apparently one of the most heavily defended locations in France and facilitates relatively quick access to the Atlantic and Mediterranean oceans.

The Triomphant-class is young—the last hull entered service just 10 years ago. But, as global threats change, the navy has to adapt as well. When commissioned, the SNLE 3G will one of the most advanced sub designs afloat.