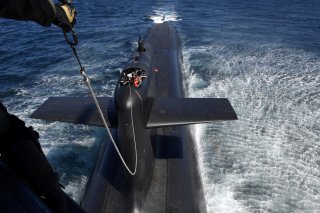 Here's What You Need To Remember: The U.S. Navy’s anti-submarine warfare skills have deteriorated greatly since the end of the Cold War at a time when possible contenders are rapidly improving their capabilities.

Another possible explanation for the skillful (simulated) attack of the Safir might be the French commander’s capable use of naturally occurring complex hydro-acoustic conditions. Prof. Chi describes a long list of such conditions, including well-known phenomena such as “convergence zones,” “sound speed gradients,” as well as the more mysterious “cold eddy” [冷涡] and “afternoon effect” [午后较应]. Likewise, the Chinese expert mentions that weather can be a major asset for a stalking submarine as it can significantly hinder the operations of surface and especially air ASW forces without significantly impacting undersea operations.

This piece first appeared in 2015 and is being reprinted due to reader interest.