France's Brand New Aircraft Carrier is On Its Way 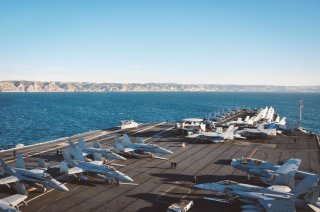 Here's What We Need to Remember: At this point, it has been speculated that the PANG would likely be nuclear powered with two K22 reactors, would be in similar size to Charles de Gaulle, and would have an airwing that would include thirty-two next-generation fighter jets.

The French Navy’s only currently active aircraft carrier, named for France’s former President Charles de Gaulle, has been in service since May 2001. Two decades is not considered especially long for carriers, but Charles de Gaulle has had more than its share of problems during its time in service—much like its political namesake—including a troubled fifteen-year construction period.

Displacing forty-two thousand tons, Charles de Gaulle is the only nuclear-powered aircraft carrier to serve outside the U.S. Navy. She is also the only carrier in the world outside of the U.S. Navy to use catapults to launch aircraft and consequently carries conventional CATOBAR-capable jets such as the Dassault Rafale and the E-2C Hawkeye.

While the aircraft carrier will remain in service until 2040, Paris has already been thinking about the next carrier, and given the trouble that it had with the Charles de Gaulle, the move comes not a moment too soon.

“Regarding the new generation aircraft carrier, I confirm that this program will be launched to give a successor to Charles de Gaulle in 2038,” Parly said in a statement. “This future aircraft carrier will federate the excellence of our naval industry in the coming decades and, through its strategic dimension, will offer an employment framework perfectly adapted from its conception to the future combat aircraft known as SCAF.”

She also told the French Parliament prior to the Euronaval conference that next year the Armed Force Ministry would commit €261 million ($305.9 million) to future studies for the PANG program.

At this point, it has been speculated that the PANG would likely be nuclear powered with two K22 reactors, would be in similar size to Charles de Gaulle, and would have an airwing that would include thirty-two next-generation fighter jets.

A 2021 French Navy Budget reported, issued last month by Member of Parliament (MP) Didier Le Gac, highlighted key points for the program. The future carrier would provide long-term control of air and sea spaces; it would provide massive and repeatable power projection far from its homeport; it would provide autonomous assessment of the situation (SITREP), and it would be complementary with the strategic oceanic force (FOST) and the strategic air forces (FAS).

“Our new aircraft carrier will also have to meet the needs of the navy, with a level of efficiency at least equivalent to that of the Charles de Gaulle,” Le Gac explained in a statement reported by Naval News. “I am thinking in particular of our interoperability with strategic allies, such as the U.S. Navy. Choices will therefore have to be made, both technologically and strategically. We are now awaiting the decision of the President of the Republic, who should answer all these questions.”

For now, it is just a matter of waiting for Macron to make that official announcement.