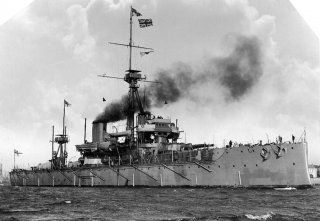 Here's What You Need to Remember: On both sea and land, the war in the West was characterized by tactical brilliance and technological innovation.

In October 1915, the Battle of Jutland still lay 8 months in the future. American outrage had forced the Kaiseliche Marine (Imperial German Navy) to limit its submarine attacks against British commerce, and Germany would not resume the unrestricted campaign until spring 1917. As they had since August 1914, the world’s two largest battlefleets studiously avoided combat with one another, playing a careful game of chess in search of fleeting advantage.

Still, much as with the Western Front, the static strategic situation in the North Sea hid vibrant innovation on both sides. Both British and German forces in the north consisted of modern, technologically advanced warships carrying the most sophisticated weapons available. Both sides undertook devilishly complicated efforts to draw the other out and exploit momentary vulnerability.  On both sides, admirals worried about (to borrow Churchill’s phrasing) losing the war in an afternoon.

The naval war between Germany and the United Kingdom was more complex and multifaceted than is commonly understood in public memory of the First World War. This article looks at where the two great navies stood 100 years ago, and how the approached the problem of figuring out how to destroy one another.

The North Sea Face Off:

The oldest German dreadnought, SMS Nassau, had turned six on October 1st. The rest of the German fleet, including sixteen dreadnoughts and a flotilla of battlecruisers, (with the exception of a contingent of pre-dreadnoughts, all about a decade old) had entered service in just a handful of years. By comparison, the USS George H. W. Bush, newest aircraft carrier in the U.S. Navy, is just over six years old.

After some actions early in the war, the situation in the North Sea had settled into a wary stalemate. The defensive technologies of the time (including mines, which sank a British super-dreadnought in 1914, and coastal defense submarines) allowed each fleet to retreat to its base and avoid battle.  The Grand Fleet sought to draw the Germans out and destroy them with superior numbers.  British forces had already won victories at the Heligoland Bight (August 1914) and Dogger Bank (January 1915), but had not yet brought the German battleships under their guns. German efforts at coastal raiding had similarly failed to draw out a digestible portion of the Grand Fleet, although they did cause panic in England.

Faced with the basic problem that either fleet could avoid engagement under disadvantageous conditions, the Germans and the British struggled to develop tactics and technologies that could give them a crucial advantage in the battle that both expected.

Submarine technology undoubtedly took a massive leap forward in the years immediately prior to World War I, with improvements in the reliability of both boats and torpedoes. And when the Germans unleashed unrestricted submarine warfare in 1917, the attacks had a devastating effect on the British economy, and on Allied war planning.

However, the naval commanders of both Germany and Great Britain did a spectacular job of keeping their most important ships safe from submarines. While U-boats wrecked a vicious toll on obsolete Allied warships in the Atlantic and the Mediterranean, they never laid a glove on the Grand Fleet. Indeed, in an action that would produce one of the best trivia questions of the war, on March 18, 1915 HMS Dreadnought rammed and sank U-29, meaning that Dreadnought sank more submarines during World War I than submarines sank dreadnoughts.

Still, the Germans spent the first two years of the war heavily investing in submarine construction.  From 24 boats available in August, 1914, the Imperial Navy had over fifty by the end of 1915, and more than 130 by the end of 1916.  This left the Germans well-prepared to undertake an alternative strategy if their efforts to destroy the Grand Fleet failed.

If not submarines, then what of aircraft? Early fixed-wing aircraft lacked the range and payload to do much damage to a modern battleship, although primitive aircraft caused some damage to ships in several theaters of war. The first seaplane carrier had joined the Grand Fleet in August 1915, in an effort to work out the problems associated with scouting and gunnery direction from the air. By 1918 the British would attempt to solve some of these problems by converting the experimental battlecruiser hybrid HMS Furious into an aircraft carrier. The end of the war interrupted plans for an air raid against the High Seas Fleet in Kiel.

On the German side, the Imperial Navy concentrated on lighter-than-air zeppelins, rather than on fixed-wing aircraft.  German dirigibles, operating under the command of the Imperial German Navy, would play a role both in scouting for the battlefleet, and in carrying the war directly to England.  Communication problems and weather difficulties bedeviled the zeppelins, however, limiting their overall effectiveness.

The ships of the High Seas Fleet and the Grand Fleet were tough enough to survive conflict with one another, and with the other threats that modern battleships faced. Most of the German ships would scuttle themselves at Scapa Flow, half a year after the war ended. Most of the British ships would survive to see the scrapyard, although several served with distinction in World War II.

Strategic stalemate has deeply colored the historical memory of World War I since the 1920s. In the wake of the war, historians (including most notably B.H. Liddell Hart) wrongly characterized Allied and German action on the Western Front as conservative and lunk-headed, ignoring the waves of innovation that transformed the contending armies repeatedly over the four years of the conflict. Seen through the lens of the daring carrier battles of World War II, a similar understanding settled on the naval war. But on both sea and land, the war in the West was characterized by tactical brilliance and technological innovation.