Generation Z Is Politically Homeless—and up for Grabs 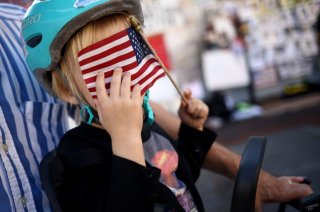 While some Americans are still reeling from the results of the 2020 election, elected officials and potential candidates are already thinking about the upcoming midterm election. With many close races expected next fall, the parties should pay careful attention to American’s youngest voters: Gen Z Americans who are aged between 18 and 24 and will be a significant proportion of the electorate in 2022.

Despite the many narratives suggesting political apathy among Gen Zers, new data from the American National Election Study (ANES), a seven decade-long survey about campaigns and elections, shows a more nuanced story. Young Americans are not being engaged, nor do they feel adequately represented, by the political parties today.

At first glance, the data suggest that Gen Zers are disconnected, unpatriotic citizens. The ANES found that regarding 2020 presidential campaigns, Gen Zers expressed lower interest than older generational cohorts. About three in 10 (29 percent) Gen Zers reported being very interested in political campaigns during the 2020 election cycle. In contrast, over a third of Millennials (35 percent) and almost two-thirds (66 percent) of Boomers expressed the same level of interest.

That narrative is, however, incomplete. It is crucial to recognize that Gen Zers came of age in a period of intense partisan rancor and political polarization. In the aftermath of the 2020 election, 47 percent of Gen Zers maintain that there is no party which represents their views reasonably well. In contrast, only about a quarter of Silents (25 percent) and Boomers (27 percent) say the same.

Gen Zers are also less likely to consider politics to be a key part of their identity. Forty-one percent of Gen Zers state that belonging to a political party is only a little or not important to them at all in forming their identity. Just 27 percent of Silents feel the same way — not surprising given that members of this generation grew up in the era of the Cold War and Civil Rights movement, during which ideology was central to identity.

Additionally, in this era of partisan polarization, it is important to note that young Americans do not hold either political party in high regard whatsoever. The vast majority (69 percent) of Gen Zers hold either a negative or neutral view towards the Republican Party, with 22 percent holding a completely negative view towards the GOP. The outlook is somewhat better for Democrats, but a majority of young Americans (53 percent) still maintain a negative or neutral view of the party, with 13 percent holding a completely negative view. While there is more disdain for the GOP among young voters, neither party is overwhelmingly liked. By comparison, 53 percent of Boomers dislike the Democrats and 52 percent dislike Republicans; not a vote of overwhelming confidence, but far superior to younger Americans.

Even with these negative findings and this fairly pessimism outlook, Gen Zers have not turned away from civic engagement. Sixty percent of Gen Zers believe that voting can make a big difference while only 17 percent believe voting will not make any difference. This generational cohort has not rejected politics; they are just not being mobilized adequately or meaningfully connecting with the extreme choices present in the electorate today.

Thus, while some may be quick to label Gen Z as a politically lost generation, the truth is that neither major political party has done enough to connect and engage with them. The party that ultimately succeeds in mobilizing Gen Z voters will have a strong advantage in future elections and the upcoming midterms.

Young Americans want to move beyond the extreme partisan rhetoric currently poisoning our political system. The nation’s largest generational cohort is still in play, but could fade from the political scene if they are sidelined by Democrats and Republicans. Whether or not either party wakes up and returns to their values of inclusion and compromise is a question that remains unanswered.

Samuel J. Abrams is professor of politics at Sarah Lawrence College and a visiting scholar at the American Enterprise Institute.