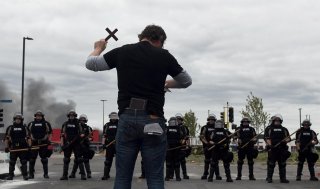 The scene is horrifying, yet all too familiar. In a viral video from Minneapolis on Monday, a white police officer presses his knee against the neck of a handcuffed, unresisting black man who begs him to get off, then loses consciousness and later dies. Meanwhile, another officer stands guard between his partner and protesting onlookers, ensuring that no one can come to the aid of the dying man. The man’s name is George Floyd, and he is the latest victim of our near‐​zero‐​accountability policy for law enforcement.

On Thursday, May 28, the Supreme Court can decide whether to take the first step towards eliminating the cornerstone of that policy, a judicially invented legal doctrine called “qualified immunity.” Mr. Floyd’s killing by Minneapolis police provides a grim reminder that for some people, it is literally a matter of life and death.

Enacted in 1871 and referred to as Section 1983 after its placement in the U.S. Code, America’s primary civil rights law provides that police and other state actors “shall be liable” to the person injured for “the deprivation of any rights.” On its face, Section 1983 creates a standard of strict liability for police and other public officials who violate people’s constitutional rights, including the right to be free from the unreasonable use of force. But in a tragic and legally baseless act of judicial policymaking, the Supreme Court radically altered that standard by holding that the right in question must be “clearly established.” And thus was born the doctrine of qualified immunity.

In practice, what the “clearly established” gloss on Section 1983 requires is for would‐​be civil rights plaintiffs to identify a relevant case in the same jurisdiction with nearly identical facts. Thus, if Mr. Floyd’s family wants to sue the officer who took his life, they will need to find an existing case from the Eighth U.S. Circuit Court of Appeals holding that a police officer may not kneel on a unresisting suspect’s neck, ignoring his pleas for help, until he passes out. If no such case happens to be on the books, their case will be summarily tossed out of court. Such is the perversity of the Supreme Court’s qualified immunity doctrine.

Among qualified immunity’s most pernicious effects is the way it appears to provide a judicial imprimatur for indisputably wrongful conduct, like bringing the full weight of one’s body to bear on the neck of a prone and helpless human being. Indeed, the Supreme Court recently let stand an Eighth Circuit decision dismissing, on qualified immunity grounds, a Section 1983 case against a Nebraska officer who picked up a five‐​foot‐​tall, unarmed woman clad only in a bathing suit and drove her head‐​first into the ground, knocking her unconscious and breaking her collarbone—not because it was lawful for him to do so, but rather because there happened to be no case on point with precisely those facts.

This is madness. Fresh from the horrors of the Civil War, Congress was well aware of how indifferent and even hostile many government officials were to the rights of African Americans when it enacted Section 1983. There are ten qualified‐​immunity cases pending before the Supreme Court, which may decide Thursday whether to accept any of those cases for review and ensure that judicial interpretation of Section 1983 remains faithful to congressional intent. The senseless brutalization of George Floyd, along with countless others, reminds us that this is not just a legal but a moral imperative.

This article by Clark Neily first appeared in CATO on May 27, 2020.