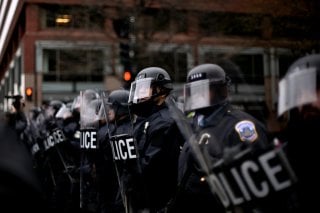 George Washington University issued an apology Wednesday to students after sending an email about an upcoming police employment fair.

The chair of the sociology department, Hiromi Ishizawa, said the employment email sent a few days prior, “hurt many people in this context of national and international focus on police violence and police abuses, especially against Black people,” according to pictures of the email chain obtained by Young Americans For Freedom, a conservative advocacy organization.

“Our Department’s programs and classes provide students with knowledge and analytical tools to understand and improve society, including to research, recognize, and redress systematic inequalities and injustice,” she added. “Current events have solidified our continued and renewed commitment to challenge ourselves and our students to be part of ending systemic racism, state violence, and other inequities.”

The previous email, which was sent on June 5, informed students of an upcoming virtual career showcase with officers from four different law enforcement agencies. The email was sent to criminal justice majors among others and offered a $500 cash prize or book scholarship to a winner of a competition.

The college also came under fire on June 5 when law school faculty requested Attorney General Bill Barr’s honorary degree be revoked following statements that he sought to quash destructive riots throughout the country, according to The Daily Beast.

The email statements and law school actions come amid demonstrations across the country following the death of George Floyd, who died after a police officer knelt on his neck for over 8 minutes, viral video shows.