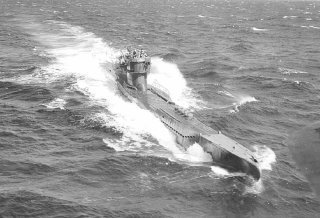 Key Point: The toilet was extremely complicated. First, it directed human waste through a series of chambers to a pressurized airlock. The contraption then blasted it into the sea with compressed air, sort of like a poop torpedo.

By World War II standards, the German Type VIIC submarine was an advanced hunter of the seas. But one unlucky vessel of its class, the U-1206, sank during its maiden combat voyage after its captain used its high-tech toilet improperly.

Yes, this really happened, and was an unexpected and tragic consequence of a real naval engineering problem.

For years. crafty German engineers had been busy developing what they thought was the next generation in undersea plumbing. While Allied subs piped their sewage into onboard septic tanks, German U-boats saved precious weight and space by discharging waste directly into the sea.

But pulling off this latter operation posed unique challenges. The system only worked when the submarine floated near the surface, where the water pressure was low. One can only imagine the unpleasant work-arounds forced upon the crew when boats had to stay submerged for prolonged periods.

As the war — and Allied anti-submarine technology — progressed, submarines were increasingly dead meat in shallow water or on the surface. But by 1945, Germany’s toilet technology had matured.

Germany’s top minds had produced a newfangled “deepwater high-pressure toilet” which allowed them to flush while submerged deep below the waves.

Advanced as it was, the toilet was extremely complicated. First, it directed human waste through a series of chambers to a pressurized airlock. The contraption then blasted it into the sea with compressed air, sort of like a poop torpedo.

A specialist on each submarine received training on proper toilet operating procedures. There was an exact order of opening and closing valves to ensure the system flowed in the correct direction.

Now meet U-1206 and its proud 27-year-old captain, Karl-Adolf Schlitt. On April 14, 1945, Schlitt and his submarine were eight days into their first combat patrol of the war. The submarine lurked 200 feet beneath the surface of the North Sea when Schlitt decided that he could figure the toilet out himself.

But Schlitt was not properly trained as a toilet specialist. After calling an engineer to help, the engineer turned a wrong valve and accidentally unleashed a torrent of sewage and seawater back into the sub.

The situation escalated quickly. The unpleasant liquid filled the toilet compartment and began to stream down onto the submarine’s giant internal batteries — located directly beneath the bathroom — which reacted chemically and began producing chlorine gas.

As the poisonous gas filled the submarine, Schlitt frantically ordered the boat to the surface. The crew blew the ballast tanks and fired their torpedoes in an effort to improve the flooded vessel’s buoyancy.

Somehow, it got worse when the submarine reached the surface. “At this point in time British planes and patrols discovered us,” Schlitt wrote in his official account.

After taking damage from an air attack, the only option was to scuttle the sub and order the sailors overboard.

“The crew reached the Scottish coast in rubber dinghies,” Schlitt added. “In the attempt to negotiate the steep coast in heavy seas, three crewmembers tragically died. Several men were taken onboard a British sloop. The dead were Hans Berkhauer, Karl Koren and Emil Kupper.”

This article by Elliot Carter originally appeared at War is Boring in 2015.