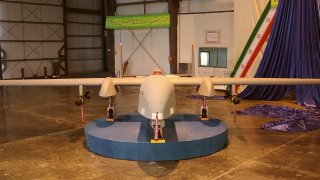 Here’s What You Need to Remember: A companion article gives additional background on Iranian drone development and surveys single-use kamikaze drones designed to crash into targets. This article instead looks at the characteristics and operational use of Iran’s Unmanned Combat Air Vehicles (UCAVs), which can engage targets with bombs and missiles as well as perform reconnaissance missions.

On August 29, Yemeni troops spotted small aircraft approaching the al-Anad airbase on the southwestern coast of Yemen. A curtain of automatic weapons fire rose up to meet the buzzing interlopers, operated by Houthi rebels hostile to the United Arab Emirates-backed South Transitional Council faction embroiled in Yemen’s civil war. But one of the drones managed to launch two missiles at a mess hall where soldiers were having breakfast, inflicting massive casualties.

Combined with a concurrent ballistic missile attack, the strike killed at least thirty soldiers and wounded dozens more. This wasn’t the first drone attack on al-Anad. In January 2019, a kamikaze drone swooped down on a military parade and exploded, killing the chief of Yemeni intelligence and five others.

Such incidents highlight how Iranian drones and drone technology, both of which have been supplied by Tehran to the Houthis, are impacting conflicts across the Middle East.

Despite a military budget typically ranging from $15-$20 billion annually, Iran fields more armed drones than many countries which spend two or three times more on defense, such as Germany (none), the United Kingdom (nine going on sixteen), and Russia.

Of course, Iranian drones aren’t as sophisticated as the Reaper and Predator drones operated by the U.S. and its allies, but they give Iran a flexible and deniable means of projecting military power across the Middle East, particularly when forward based in Syria or transferred to armed groups in Iraq, Lebanon, and Yemen.

A companion article gives additional background on Iranian drone development and surveys single-use kamikaze drones designed to crash into targets. This article instead looks at the characteristics and operational use of Iran’s Unmanned Combat Air Vehicles (UCAVs), which can engage targets with bombs and missiles as well as perform reconnaissance missions.

Iran deployed its first twin-tail Mohajer-1 tactical drones in 1986 during the Iran-Iraq war to snap photos of Iraqi positions, a few of which were modified to carry RPG-7 rocket-propelled grenades. Lacking a video feed, the drone couldn’t practically venture beyond the visual range of its operators. Nonetheless, there’s an Iranian war movie depicting Muhajirs operations during that conflict.

In the 1990s and 2000s, more advanced Mohajer-2 and -4 drones were produced with improved range and modernized sensors for reconnaissance and target practice roles, though some Mohajer-4s were even outfitted with man-portable QW-1 anti-aircraft missiles.

Development culminated in the latest Mohajer-6 UCAV, which has a maximum range of 124 miles, an endurance of 12 hours, and can fly up to 18,000 feet high—above the reach of many short-range air defense systems.

The Mohajer-6 incorporates composite plastic materials to save weight, features a gimbaled sensor turret with electro-optical/infrared sensors and a laser rangefinder, and can perform automated takeoffs and landings. For armament, it can carry two Qaem-1 glide bombs (TV-guided, or using laser or infrared seekers) on underwing hardpoints, though it can alternately carry electronic warfare, jamming, and electromagnetic sensor (ESM) payloads.

The Mohajer-6 has reportedly been used against insurgents in Iran, including a strike on Kurdish dissidents in 2019. Iran has sold a dozen Mohajer-2s (known as Arpias) to Venezuela,  and some to Hezbollah. Moreover, photos of an airbase in Semara suggest the Ethiopian military is using Mohajer-6s to conduct drone strikes in Addis Ababa’s war against Tigrayan forces.

Iran’s Predator-equivalent boasts 24-hour flight endurance and a maximum range of over 1,050 miles—but the practical range is seriously constrained by the reach of the operator’s radio command link, officially reported to be 124 miles, though some experts contend it may extend to over 200 miles.

That means to leverage the type’s long-range, it would have to be pre-programmed, and/or have control relayed to a drone operator closer to the mission space. A bulge-nosed variant of the Shahed has also been displayed which some speculate may house the satellite link for navigation and/or long-range communication.

The Shahed has seen extensive combat, deployed to Syrian airbases starting in 2014 to surveil and later attack anti-Assad rebels—and even a U.S. special forcers base in al-Tanf. It’s also been used against insurgents and drug smugglers on Iran’s borders with Afghanistan and Pakistan. Two Shahed 129s have been shot down by U.S. F-15 fighter jets, one by Pakistani JF-17 fighter jets, and one by an Israeli Patriot missile.

In 2020 an Iranian Navy variant of the Shahed-129 called the Simorgh was tested against maritime targets using guided weapons. Simorgh has a range of 930 miles and a ceiling of 25,000 feet.

In December 2011, a U.S. RQ-170 stealth drone crashed in Iran, allegedly due to Iranian cyber warfare, and was recovered relatively intact. Iranian engineers attempted to reverse-engineer the RQ-170, resulting first in a mockup dubbed the Shahed 171 Simorgh falsely presented as flying aircraft in 2014. This was followed by actual Shahed 191 flying wing stealth drones, the piston-engine Saegheh-1, and jet-powered Saegheh-2.

Exactly how stealthy the Saegheh-2 is is unclear, as replicating stealthy form factor alone doesn’t guarantee low radar visibility; radar-absorbent materials and precision manufacturing matter too. Indeed, in 2018 an Israeli Apache helicopter shot down a Saegheh based in Syria after it passed over Israeli airspace. Later that year it was allegedly used to strike rebels in Syria.

In February 2021, the Iranian Air Force unveiled a new longer-range MALE drone closely resembling the U.S. MQ-9 Reaper UCAV right down to the triple tail fins. The Kaman-22 can reportedly fly out to 1,860 miles and for more than 24 hours and can carry up to six weapons on underwing hardpoints weighing 661 pounds collectively. Still, it’s unclear that the drone has the long-distance communication equipment needed to leverage that range.

Allegedly Iran’s largest drone, the Fotros long-range UCAV was prominently unveiled prior to nuclear arms control talks in 2013. It supposedly boasts a range of 1,200 miles and endurance of up to 30 hours, a maximum altitude of 25,000 feet, and a payload of up to six Qaem-1 precision glide bombs. After vanishing from media for years, the type resurfaced in an exercise in 2020 and is now allegedly entering service with the IRGC.

In 2002 HESA began reverse engineering turbojet-powered MQM-107A Streaker practice target drones it had acquired from the U.S. in the 1970s. Combined with technology from the South African Denel Skua target drone, the resulting Karrar drone looks like a cruise missile with wider wings and has a maximum speed of 560 miles per hour.

Still mostly serving as a target drone, the Karrar can be used as a kamikaze weapon and has been adapted to carry a 500-pound Mark 82 unguided bomb, or two 250-pound Mark 81 bombs, or two Kowsar or Nasr-1 anti-ship missiles (though the Nasr-1 seems too heavy at 771-pounds each.)

The Karrar’s maximum range of around 620 miles is estimated to shrink by fifty percent when carrying weapons. Lacking an obvious optical sensor, the Karrar likely relies on pre-programmed instructions to carry out longer-range missions, and its unguided bombs probably lack accuracy.

Curiously, Iran has also tested a Karrar interceptor variant armed with short-range air-to-air missiles—including a domestic clone of the U.S. Sidewinder missile called the Azarakhsh—to destroy an aerial target. There are claims Karrars have been transferred to Hezbollah, though whether it has seen operational use is unclear.

Those interested in further reading and imagery of Iranian drones are recommended Orxy’s Handbook on Iranian Drones and the The Iranian Drone Threat.