Glock 30SF: If You’re Looking for a Concealed Carry, Get a G30S Instead 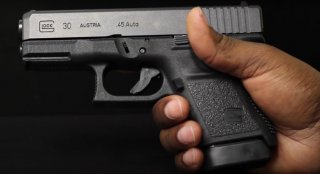 Here’s What You Need to Remember: The 30SF is a good gun, but I’m honestly not seeing a reason I’d go out and purchase it. It wouldn’t be that great of a duty weapon or a concealed weapon. On top of that, there’s the Glock 30S out there which is basically superior any which way you cut it.

.45 is a fun caliber. It’s big, bulky, and above all an absolute classic. That’s not even mentioning that sweet stopping power. Now, I’m not the type to carry .45 but that doesn’t mean I don’t have an appreciation for this old-timer caliber. It seems like Glock does too. They have a decent lineup of pistols chambered in 45 ACP.

The Glock 30SF is sort of a bridge between two variants of Glocks. The first iteration was the Glock 30, but there were more than a few complaints about how big the frame was. You could barely reach the trigger, so Glock released the 30SF or 30 Short Frame. Is it any good?

I’ve reviewed a lot of Glocks in my time. Here’s the short story on their visuals: they all look identical. I’ve always liked the look of Glocks, but some people don’t. If you like their looks, you’ll be happy with this. If you don’t, the 30SF won’t change your mind. The only outstanding problem I have with the 30SF as a whole is actually this extremely fat slide. It’s wide and makes me feel mildly wary of using it for concealed carry. The frame is low profile, but the slide definitely isn’t.

I wasn’t comfortable concealing this gun. I opted for a 43X instead. It is worth mentioning though that the 30SF is actually the inferior .45 in Glock’s catalog. A better alternative for self-defense carry would be the Glock 30S which combines the slimmer frame and capacity of the 30SF with the thinner frame of the G36 (a pistol that was good but lacked sufficient capacity).

Accuracy here is just about as good as you’d expect. The 30SF worked perfectly fine as is to be expected from any half-reputable firearm manufacturer out there. It did very well within twenty-five yards as well as past that although it was limited by my shooting ability. Either way, it was a lot of fun out on the range. I don’t shoot .45 nearly as much as 9mm or my rifles, but it’s good fun and a great round if that’s what you’re interested in.

The reliability showed out in true Glock fashion by performing perfectly right out of the box. That’s probably the most important aspect for me when it comes to firearms and why I’m a little bit of a Glock fan.

A lot of people have this preconception that .45 kicks like a mule, but I think that’s just because they haven’t really shot one before. Yes, there’s more recoil but it’s not snappy recoil like 357 out of a snub nose. It’s more like a slow push, especially in these Glocks, Even for the 30SF’s size, I had a relatively comfortable time and felt like I could maintain control at all times.

The 30SF is a good gun, but I’m honestly not seeing a reason I’d go out and purchase it. It wouldn’t be that great of a duty weapon or a concealed weapon. On top of that, there’s the Glock 30S out there which is basically superior any which way you cut it.

I’m not saying avoid this gun. It has a lot going for it like soft recoil, solid carrying capacity, and that trademark Glock reliability, but Glock itself has guns that do this, but better. If you like to collect Glocks, the 30SF is worth your time. If you’re looking for a concealed carry, get a G30S instead.