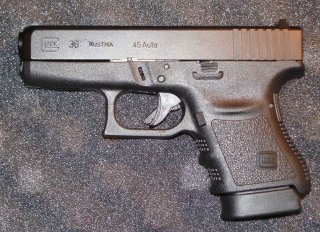 Here's What You Need To Know: The Glock 36 is, like the Officer, a single stack .45 pistol. Like the Officer, the Glock is essentially a cut-down version of the original pistol. That having been said, Glock’s more modern operating system and use of advanced materials give it a decisive lead over the older design.

Until recently, the most common compact .45 caliber handgun was of a type known as the Officer’s model. A derivative of the 1911A1 Government, in 2011 it was finally superseded by an even lighter pistol—the Glock 36. Chambered in .45 ACP and following the same winning formula as previous Glocks, the model 36 could be the best compact single stack .45 on the market today.

(This article originally appeared in May 2019.)

The 1911 .45 caliber pistol, designed by John Moses Browning, was one of the most successful pistols of all time. Adopted by the U.S. Armed Forces in time for World War I, it served on through World War II, the Korean War, Vietnam, and the waning years of the Cold War. The slab-sided, all-steel pistol was large, heavy, and imposing, but it was also durable and could last for decades. Colt’s Manufacturing subsequently developed and released a smaller and lighter version, the Colt Commander, but it failed to gain traction to replace the original 1911A1.

A second pistol developed by Colt, the Colt Officer’s Model, shrank the pistol even farther, cutting barrel length an inch and a half and overall weight by half a pound. The result was a smaller, lighter, more compact version of the 1911A1 better suited for the officers of mechanized armies that spent a lot of time inside the confined spaces of armored vehicles or aircraft. The tradeoff was an increased tendency of the shooter to experience muzzle flip, but that was the price to pay for pairing the .45 cartridge with a shorter barrel.

In 2011, Glock released a new pistol to take on Officer-type pistols in the concealed carry .45 market. The Glock 36 is, like the Officer, a single stack .45 pistol. Like the Officer, the Glock is essentially a cut-down version of the original pistol. That having been said, Glock’s more modern operating system and use of advanced materials give it a decisive lead over the older design.

The Glock 36 is, like all Glock variants in all calibers and types, essentially the original model 17 at heart. Glock pistols eschew the traditional hammer and firing pin system especially common to older pistols for a striker-fired system in which a striker contacts the firing pin. In striker-fired pistols, the pistol is half-cocked when the slide is racked and a round is chambered—the pistol is fully cocked and discharges with the pull of a trigger. This allows for a number of safety mechanisms to be embedded into a striker-fired system, including a trigger safety, firing pin safety, and trigger safety.

Another feature that the Glock lacks over the 1911 is the use of polymers to reduce weight. All Glocks use a polymer frame and grip to house the magazine and fire control group, reinforced in some locations with steel. Moreover, the use of polymers when possible allows the Glock to achieve a four-ounce reduction in weight. The Glock 36 still uses a steel slide, barrel, guide part, and other parts to deal with the stress of and recoil of the firearm cartridges.

The Glock 36 has an overall length of 6.97 inches with a barrel length of 3.78 inches. It has an overall width of 1.18 inches. It weighs just 22.4 ounces with an unloaded magazine, and a loaded magazine of seven rounds bumps the weight up to 26.81 ounces. One example of an Officer-type pistol produced today, the Springfield Armory Range Officer Compact, is 7.6 inches long with a 4-inch barrel. An all steel gun, it weighs 28.5 ounces unloaded, a full quarter pound more than the Glock. The Range Officer Compact has the same magazine capacity, six rounds, as its Glock competitor—plus an additional round in the chamber.

The Colt’s Officer type pistol and Glock 36 are both scaled down variants derived from pistols meant for military service. They both have their advantages and disadvantages—some users may prefer the exposed hammer of the Colt or the Colt’s all-steel design—but as subcompact pistols, the American and Austrian pistols bring new things to the table their full-sized versions do not. The Glock 36 is an excellent for those that carry concealed, work in confined spaces, or simply want a small, powerful, highly reliable handgun.