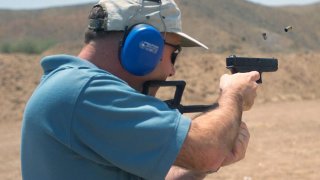 Here's What You Need To Remember: The .45 GAP round allows the Glock 37 to be dimensionally identical to the Glock 17 while packing the power of the Glock 21.

An effort by Glock to provide a powerful handgun that was also a good ergonomic fit for most shooters resulted in the Glock 37.

Introduced in 2003, the Glock 37 is chambered in the first caliber developed in conjunction with the Austrian gun manufacturer, .45 Glock Auto Pistol. Designed as more compact alternative to the legendary .45 ACP round, .45 GAP mimics its performance while allowing for smaller magazines and handgun grips.

Glock’s original Glock 17 pistol arrived in the United States in the mid-1980s. Considered one of the prototypical “Wonder Nines,” the Glock 17 combined a lightweight polymer frame, steel slide, and a large seventeen-round nine-millimeter magazine. Although the Glock 17 was immensely popular, concerns about the nine-millimeter round’s lack of power kept .45 ACP owners from jumping on the bandwagon. Glock reached out to .45 ACP enthusiasts in 1990 with the first non-nine-millimeter Glock, the Glock 21. Combining the Glock platform’s reliability and performance with thirteen rounds of .45 ACP, the Glock 21 went a long way towards wooing big bore shooters with a gun that combined the latest in handgun technology (admittedly not a forte of .45 ACP pistols) with the powerful cartridge.

The Glock 21 was an excellent pistol but had one problem: the double-stacked ammunition scheme used in the Glock 17 and now the Glock 21 created a handgun with a wide grip that was less than ideal for shooters with smaller hands. This could potentially become an issue with local law enforcement across the United States, which Glock saw as a toehold into community acceptance and essentially free advertising. Ethnically and gender diverse police departments might prefer a .45 Glock with a narrower grip.

While the .45 ACP’s recoil is often overstated and quite controllable, a narrower grip could inspire greater confidence in shooters with smaller hands, as they are better able to wrap their fingers and palm around the weapon. The narrow, single stack 1911A1 handgun invented by John Moses Browning, although large and relatively heavy, has a much narrower grip allowing virtually anyone to maintain comfortable, positive control over the weapon.

Glock partnered with ammunition developer and manufacturer Speer/ATK to develop a narrower version of the .45 ACP round. The result, .45 GAP (Glock Auto Pistol) has an overall length of 27.2 millimeters—as opposed to 32.4 millimeters. This made the new .45 GAP round even shorter than nine-millimeter parabellum, which has an overall length of 29.69 millimeters. This translates into narrower magazines: the Glock 21 has a magazine width of 1.15 inches, while the Glock developed to take advantage of .45 GAP, the Glock 37, had a width of .904 inches. As magazine size dictates grip size, .45 GAP allowed the Glock 37 grip to have a circumference nearly half an inch smaller than the Glock 21.

Glock and Speer/ATK created the new round by utilizing the latest in metal and propellant technologies. The two companies needed to recreate the performance of the .45 ACP round in a shorter cartridge, which meant doing more with less internal casing volume. This also meant using propellant that would create even higher internal pressures than the .45 ACP’s 19,000 psi. The use of new propellant pushed .45 GAP’s pressures to 23,000 psi. The result is a new caliber very similar to .45 ACP: according to Ballistics101.com, Federal full metal jacket (FMJ) rounds in .45 ACP generate 404 foot-pounds of energy at the muzzle with a velocity of 890 feet per second. Federal FMJ in .45 GAP generates 395 foot-pounds of energy with a velocity of 880 feet per second.

The result of Glock’s co-development of the .45 GAP round was a .45 caliber handgun that is dimensionally identical to the Glock 17 while packing the power of the Glock 21. Thanks to the Glock 37, those with smaller hands don’t have to give up round performance to find a pistol that suits them. The Glock 37, while not for everyone, neatly fills a niche thanks to innovation and some creative thinking.