Glock Who? The Heckler & Koch VP9 9mm Might Be Even Better 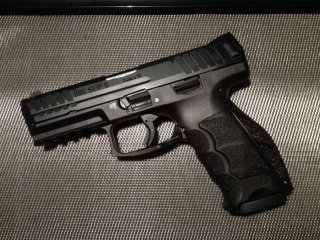 Here's What You Need to Remember: What everyone at the range wants out of a pistol is one that is more accurate than them. The HK VP9 certainly delivers in this regard. Especially if you’re a beginner just learning how to shoot, a weapon like the VP9 is an excellent option to get you started.

The HK VP9 is a full-sized striker-fired pistol made by Heckler & Koch. Often compared to the Glock, the VP9 actually gives the more common polymer pistol a run for its money. In fact, if you’ve used a Glock and felt underwhelmed, you’ll want to get your hands on a VP9. This modern European firearm would be great at the range, for self-defense, or even concealed carry.

What everyone at the range wants out of a pistol is one that is more accurate than them. The HK VP9 certainly delivers in this regard. Especially if you’re a beginner just learning how to shoot, a weapon like the VP9 is an excellent option to get you started.

As a full-sized pistol, the barrel length makes for not only an accurate shot, but also a longer sight radius when compared to, say, the Glock 19.

The sights themselves are luminescent, with two dots on the rear sights and a single forward sight. Lining up a shot is simple, and straightforward: everything you want out of a pistol.

If you haven’t owned a firearm by Heckler & Koch before, you owe it to yourself to get one. In my experience, every HK gun I’ve been able to test has been reliable unerringly, and the VP9 is no exception.

This isn’t even taking into account the inherent reliability of the striker-fire platform, but I look forward to many long days at the range with the HK VP9.

The handling of the HK VP9 deserves special mention. It seems the designers of this gun put ergonomics as a top priority, with a few key features that stand out among similar pistols.

First, the grip: the grip of the VP9 is molded, with a light texture that allows purchase without being aggressive. Notably, the grip is customizable, coming out of the box with small, medium, and large panels that can be fitted into the side and back of the grip however you’d like.

This means that you can, for example, fit a large grip on the backstrap with small ones on the side panels, or vice versa. The moddable grip is the perfect way to accommodate lefties, and is a feature not many pistols have right out of the box. The pistol itself is made to be ambidextrous, with the magazine and slide releases on both sides of the weapon.

Lastly of note is the two polymer wings on the back of the slide, just below the rear sights. These little things are a massive help in pulling the slide back, especially if you’re wearing gloves or the gun is wet. Any feature that makes the operation of a firearm smoother is a good thing in my book.

The trigger, according to HK, has a pull of 5 lbs, 4 oz, which is comparable to other full-sized polymer-based pistols (read: Glocks). HK also claims that the VP-9’s trigger is “best-in-class,” surpassing all its competitors, and I don’t disagree.

I also don’t think that’s a major accomplishment, however. In general, the trigger is smooth on the take up and has a decent break. It features ridges that assist your trigger finger with the pull. It’s better than the Glock, for sure, but I’d say it’s fairly middle-of-the-pack for a factory trigger.

If you see this pistol getting a lot of use from you, an aftermarket trigger would be a simple upgrade.

The HK VP9 comes with two 15-round magazines of 9x19mm ammunition. Cutouts at the base of the magazine make stripping them easier, a quality-of-life feature that I like seeing in my firearms.

Again, the paddle-style release isn’t popular, but works just fine as an ambidextrous magazine release once you get used to it. I found using my trigger finger (as opposed to my thumb) worked better, but I often forgot to do that while actually shooting. It requires a different type of muscle memory, which anyone can develop with time.

As a 9mm pistol, the VP9 has a wide array of different bullets available, and it can also eat just about all of them thanks to masterful construction by Heckler & Koch.

While some might consider it too large for concealed carry, especially compared to subcompact pistols such as the Ruger LCP, the VP9 is still a solid option provided you have a decent belt and holster for it. Even if not, it’s still a great size for a home defense option.

Being a 9mm full-size pistol, the felt recoil on the HK VP9 is fairly soft and easy to manage, despite its lightweight.

My only complaint in this regard is the high bore axis of the gun. While the backwards recoil of the shot is soft, the muzzle flip caught me off guard at first and took a few rounds to get used to. Overall not a big issue.

The MSRP of the VP9 sits at $719, which is quite the investment for the average buyer.

However, the gun is a few years old by now, making them fairly easy to find on sale. If you can pick up a VP9 for $600 or lower, in my opinion, it’s without a doubt a worthwhile investment if you’re looking for a full-size, striker-fired pistol.

The HK VP-9 is a solid 9mm workhorse pistol that you can take to the range or carry for self-defense.

For those who just hate the paddle-style magazine release (which I totally understand), I recommend looking into the VP9-B, which features a button release but otherwise is largely the same pistol.

If you don’t yet own a striker-fired pistol and want to, the HK VP9 is a solid choice as a dependable sidearm with HK’s time-tested reliability. It will without a doubt be worth the cost of purchase, measured over its long lifespan.