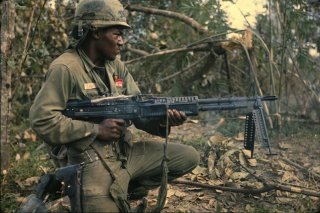 Here's What You Need to Know: None of the above firearms were as widely used as the M16 or AK47, but are just examples of the diverse types of small arms that were employed in the South East Asia and beyond.

No American firearm is as closely associated with the war in Vietnam as the M16, and it was used throughout the conflict by not only the U.S. Army and USMC, but by the Army of the Republic of South Vietnam (ARVN) and even by units of the Australian Army and New Zealand Army. Likewise, the People’s Army of Vietnam (PAVN) and the Viet Cong (VC) have also associated universally with the AK47.

Yet, the truth is that while proven to be well-suited to the conflict—even if the M16 did have a rough baptism by fire—there were some other fine firearms that were employed during the war.

Ask many a gun expert or history buff to name the best semi-automatic rifle used during the Vietnam War and one answer will almost certainly be the M14. While the M14 was actually a fine weapon, it was heavy and not ideally suited to the war in Southeast Asia.

Rather the best semi-automatic of the war was the one carried by the Australians and New Zealanders—the L1A1 Self-Loading Rifle. It was the British version of the Belgian-made FN FAL battle rifle. Chambered in the widely-accepted 7.62x51 NATO cartridge, the rifle was gas-operated with a tilting breech block and accepted a twenty-round straight detachable box magazine. It was accurate and reliable, able to endure the rugged terrain of South East Asia and powerful enough to stop the enemy in their tracks at extended ranges.

The other notable semi-automatic rifle of the Vietnam War was one that was developed at the tail end of World War II by noted Soviet arms designed Sergi Gavrilovich Simonov. It was actually the first weapon to be chambered for the 7.62x39mm M43 round, which the Soviets developed in response to the German’s 7.92x33mm Kurz ammo that was used for the StG44/MP44 (Sturmgewehr). Soviet arms designers saw the benefits of this intermediate cartridge and looked to create their own version.

The SKS was developed as a semi-auto carbine—much like the U.S. made M1 Carbine—but was soon replaced by select-fire AK47. However, the SKS was widely used in Vietnam, where it provided greater range and better accuracy than the AK47. It was easy to maintain and just as rugged, perfect for a poorly trained but dedicated insurgent.

The M14 may not have been ideally suited to Vietnam, but the national match grade version later redesignated the M21 proved to be just what the military needed. Developed at the Rock Island Arsenal, and designated the XM21, it offered the high-caliber hitting power of the M14 while its commercial 3-9X variable telescopic sight helped ensure accuracy at longer ranges than the iron sights allowed.

Upgraded after the war, and fitted with a fiberglass stock, the M21 remained in use with the U.S. Army until 1988, it is still used by some U.S. National Guard units today.

The American M60 general-purpose machine gun was adopted in 1957 and has become iconic thanks to the Rambo movies, but the gas-operated, air-cooled, belt-fed 7.62mm machine gun was actually second only to the Huey helicopter as the “most recognizable“ weapon of the Vietnam Era according to a poll in the Army Times.

Developed from the feed system of the German MG42 machine gun and the operating mechanism of the FG42 paratrooper rifle, the M60 was technically a crew-served weapon—meaning a team of three would transport, load and fire it—but it could still be handled by a single soldier. It was meant to replace both the M1918 Browning Automatic Rifle and M1919A6 Browning machine gun and went on to be so much more, remaining in use to this day.

Developed at the end of World War II to be a replacement for the British Army’s Sten Gun, the Sterling submachine gun saw use for nearly fifty years and was carried in the Malayan Emergency, Korean War, the Falklands War and other conflicts. While the British military didn’t take part in Vietnam, a suppressed version of the Sterling—the L34A1—was used by the Australian Special Air Service Regiment.

The 9x19mm Parabellum SMG had a rate of fire of 550 rounds per minute and an effective range of 200 meters. Its compact size, less than nineteen inches with the sock folded, made it particularly well-suited to the jungles of South East Asia. The suppressed Sterling was later used by both sides in the Falklands War.

None of the above firearms were as widely used as the M16 or AK47, but are just examples of the diverse types of small arms that were employed in the South East Asia and beyond.