Go Back to Russia: Why Did India Return Its Rented Submarine Early? 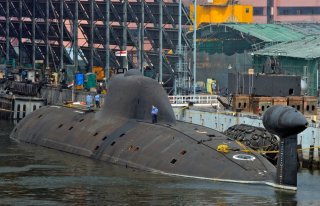 Here’s What You Need to Remember: Chakra may have been ill-adapted for warm waters like those of the Indian Ocean—a known problem with past Russian-built submarines—and was proving increasingly costly to maintain while offering decreasing operational availability.

On June 3, a Russian LiveJournal account posted a curious recording of Russian-built INS Chakra II, then under lease as the Indian’s Navy only nuclear-powered attack submarine, traversing the Strait of Malacca into the Pacific Ocean escorted by the Russian destroyer Admiral Tributs and an Indian destroyer (more pictures here). The following day media reports confirmed that the Indian Navy was returning Chakra II—ten months before its lease from Russia had expired.

Media reports later explained that Chakra-II was returned early due to high costs of repairs and maintenance. But curiously, an initial Russian report claimed she was being returned after sustaining significant damage from an exploding high-pressure air cylinder. The report has since been retracted.

Regardless, India remains intent on leasing at least one and possibly two more nuclear-powered attack submarines (SSNs) from Russia, even as it is investing big in buildings its own domestic SSNs.

Unlike conventional submarines, nuclear-powered submarines can remain submerged deep underwater and sustain high speeds near indefinitely. But they are very challenging and expensive to develop, and difficult to purchase abroad due to the Non-Proliferation Treaty effective since 1970, which bans the transfer of the enriched nuclear fuels used in naval reactors.

Thus in late 1987 the Indian government instead leased the Soviet Charlie-class cruise missile submarine K-43, commissioned into the Indian Navy as Chakra-I. This gave India its first experience operating a nuclear-powered submarine, albeit with Soviet minders aboard, leading to the lease’s termination just three years later.

But in 2004, New Delhi was looking t0 lease as many as two more nuclear boats and furnished around $660 million in funding to complete construction of the unfinished Akula-class attack submarine K-152 Nerpa. Laid down at Komsomolsk-on-Amur in 1993, she had been rusting there for over a decade due to inadequate construction funds.

Introduced late in the Cold War, the Project 971 Akula-class was the first Soviet submarine to close the acoustic stealth gap with U.S. submarines. India’s Project 971I variant featured additional quieting measures and a much more capable MGK-501 Skat-MS sonar, but was tailored with standard 533-millimeter diameter tubes instead of the standard model’s oversized 650-millimeter tubes, and lacked the decoy launchers of later-model Project 971 boats.

Nonetheless, Chakra II did bring to the table standoff-range attack capability with various types of Klub-S cruise missiles, derived from the Kalibr cruise missile but with a range shortened to 136-186 miles to avoid missile technology export controls.

Russian press claimed K-152’s construction was hampered by the use of subpar Chinese metal, water leakages, and a shortage of experienced submarine builders. Nonetheless, she was eventually transferred to Vostok to undergo final fitting and trials. But in 2008, while undergoing sea trials in the Sea of Japan, her newly digitized LOKh fire suppression system accidentally discharged freon fire-fighting gas that fatally asphyxiated 20 onboard. You can hear the audio of the tragic incident here.

Though a bored crew member allegedly toying with the fire alarm system was accused of causing the accident, many believe he was scapegoated, and some note that the man who certified the fire suppression gasses suspiciously drowned while biking shortly thereafter.

$63 million in repairs to K-152 were delayed at Vostok when the shipyard had its electricity cut off due to cash-flow problems. But Chakra-II was finally commissioned with an Indian crew at Vladivostok in January 2012 and inducted into Indian Navy Service that April after cruising down to the Visakhapatnam submarine base on India’s eastern coast.

Thanks to her speed and endurance, Chakra-II allegedly was used to escort Arihant or the Indian carrier Vikramaditya, or to shadow Chinese warships in the Indian Ocean. But in October 2017 she returned to base with a large hole in her bow sonar dome reportedly incurred while traveling at high speeds, which necessitated $20 million in repairs by Indian and Russian technicians.

Then as part of the Indian Navy’s anticipatory naval mobilization following an Indian airstrike targeting militants in Balakot, Pakistan in February 2019, Chakra II was reportedly assigned to search for Pakistani submarine PNS Saad. Though not nuclear-powered, this French-built Agosta-90B-class submarine carried nuclear-armed cruise missiles and could remain submerged at low speeds for many days using its MESMA steam-turbine air independent propulsion system. Saad was finally located three weeks later, though by what means is unclear.

Why was Chakra-II returned early?

India’s NDTV reports that Chakra was returned due to its ‘‘increasingly unreliable powerplant and maintenance issues,” while The Print states: “both India and Russia were trying to work out a possible extension of the Chakra II, it did not materialise because of cost and technical aspects. The Chakra is said to have had some major repairs over the last few years because of which sailing was limited.”

Russian naval insider Maxim Klimov similarly wrote: “[Chakra II] was very intensively used by the Indian side, which, given the difficult technical conditions of the “warm ocean”, led to significant operational loads on the structure, so that the last few years, according to a number of resources, the boat (as opposed to very active work at sea at the beginning of service) went out into the ocean very rarely.”

But according to Indian media, Russia’s state TASS news agency initially reported a more pressing issue: that while at sea two years earlier, a high-pressure air cylinder (used to assist evacuation of the ballast tanks while surfacing) situated between the inner pressure hull and outer light hull had exploded, causing damage to “electronic weapons and hydro-acoustic equipment.” Separately, an anonymous military-industrial source allegedly reported there had been an Indian casualty in the incident, and that the repairs had been completed prior to the return of Chakra.

However, TASS then deleted the original article, claiming it had been “issued erroneously.” Klimov dismisses the accident explanation as “nonsense,” arguing an air cylinder explosion, though possible, would not compromise the pressure hull and would be unlikely to cause serious enough damage.

Other commentators speculate an explosion might have occurred due to corrosion of the cylinder’s metal in an especially hot and humid climate. Theoretically, dangerous deterioration of the metal should have been detected by routine maintenance radiographs, but such procedures have been neglected before.

It seems plausible that the change in TASS’s reports could reflect Russia and India seeking to paper over a potentially embarrassing accident linked to inadequate maintenance or flawed equipment. However, one shouldn’t discount out of hand the possibility the initial report was simply inaccurate or exaggerated.

Either way, Chakra may have been ill-adapted for warm waters like those of the Indian Ocean—a known problem with past Russian-built submarines—and was proving increasingly costly to maintain while offering decreasing operational availability.

Alongside its growing fleet of nuclear-powered ballistic missile submarines, New Delhi is prioritizing the construction of six nuclear-powered attack submarines over building a third aircraft carrier. These could pose a significant threat to the Chinese military’s growing presence in the Indian Ocean—but they won’t enter service sooner than 2032.

To fill the gap, New Delhi already agreed in March 2019 to another 10-year lease for the forthcoming Chakra-III for $3 billion, due for delivery in 2025. This would be refurbished and outfitted with Indian communication and sensor systems.

While prior speculation focused on the Akula-class Kashalot and Irbis, current likely candidates include the K-391 Bratsk and K-295 Samarra both under renovation at Severodvinsk due for completion in 2025. Klimov writes that he has “serious doubts” the 2025 due date will be met, and claims another possibility is that K-152/Chakra II itself could be refurbished and refueled, or that the Lazurit shipyards could refit or build new titanium-hulled Sierra-class attack submarines. Regardless, India’s unique nuclear-powered submarine-leasing scheme with Russia seems destined to last at least another decade or two.