Going All In? Russia Is Making Major Strides with Hypersonic Weapons 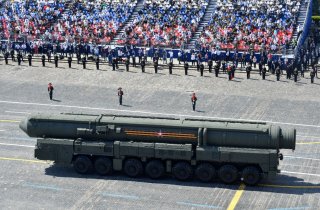 Here's What You Need to Remember: The development of hypersonic weapons is one area where Moscow has been seen to have a significant—and potentially serious—head start over the United States. Russia has been conducting tests of its new class of Tsirkon/Zircon missiles, and it highlights the potential high speeds of the missiles, which could reach upwards of Mach 8. That would give targets little time to react.

Even as the United States has put an increased emphasis on the development of hypersonic weapons, the Russian military has made great leaps forward and this week suggested the platform could be the backbone of Russia’s conventional deterrence forces.

“The potential of non-nuclear deterrence forces, primarily, precision weapons, is being strengthened. Hypersonic systems of various basing will comprise their backbone,” Russian Defense Minister Army General Sergei Shoigu said at an annual operational and mobilization gather of commanders on Tuesday as reported by Tass.

The defense chief added, “the Army and the Navy are constantly fulfilling tasks that require commanders to have a profound command of the situation, knowledge of the capabilities of their forces and resources, a creative approach and a reasonable initiative.”

“The matter of development and commissioning of high-precision long-range weapons is under special monitoring by the president of the Russian Federation,” Shoigu explained. “We must report on the progress in this field to the head of state in April.”

The development of hypersonic weapons is one area where Moscow has been seen to have a significant—and potentially serious—head start over the United States. Russia has been conducting tests of its new class of Tsirkon/Zircon missiles, and it highlights the potential high speeds of the missiles, which could reach upwards of Mach 8. That would give targets little time to react.

Hypersonic missiles are so fast, they don’t necessarily need to carry any explosives, as the impact of something traveling hypersonically would create a terrific explosion, whilst evasive maneuvers are difficult because the weapons are also highly maneuverable. Moreover, because the missiles can travel so quickly through the atmosphere, these generate a plasma field that becomes radar absorbent. That in turn makes the missiles harder to detect.

It is also believed Russia has become the first country to field submarine-based hypersonic missiles. That allows the launch platform to remain concealed and yet highly mobile. As the missiles can be launched without the need to surface, the submarines could travel close to targets and further reduce the limited reaction time.

Moscow’s head start has been praised by Russian Federation President Vladimir Putin, who highlighted the abilities of the Tsirkon missile during a year-end news conference.

“[The Tsirkon missile] can be placed both on stationary carriers and on surface and subsurface ships,” Putin noted. “Where can it be placed? In neutral waters. So, you can calculate the range and the speed and everything will become clear. Does this change and influence the situation somehow? Of course, it changes and influences it.”

The Russian Navy performed multiple tests of the Tsirkon from a floating surface vessel in the Barents Sea near the Arctic region. A video released by state media in November showed the night-time launch of what is reportedly a Tsirkon missile flying into the sky.