Got Extra Ships? Turn Them into Floating Gas Stations 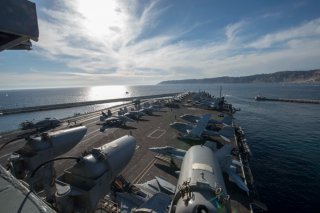 Here's What You Need to Remember: With Navy aircraft carrier battle groups and amphibious ready groups standing off potentially hundreds of miles away from Marine expeditionary bases, rotorcraft and planes could benefit from a refueling platform bobbing somewhere in the ocean mid-way between the naval groups and the island bases.