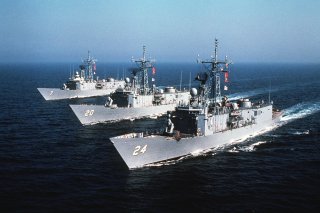 Here’s What You Need to Remember: A total of seventy-one of the warships were built between 1977 and 2004 by Bath Iron Works and Todd Shipyards, and fifty-one saw service with the U.S. Navy. The last of those—USS Simpson (FFG-56)—was decommissioned in 2016, while many of the retired were either mothballed or transferred to other navies.

Many U.S. Navy warships have a lasting legacy and will be remembered for their accomplishments and abilities. This includes vessels such as the Iowa-class battleships and USS Enterprise (CVN-65), the first nuclear-powered aircraft carrier. Even the Navy's workhorse Arleigh Burke-class destroyers (DDGs) will likely find a place in history given the role these have played in recent conflicts.

The same likely may not hold true for the Oliver Hazard Perry­-class of low-cost gas turbine-powered anti-submarine warfare (ASW) frigates, which could also perform the secondary role as anti-aircraft (AA) and anti-surface ship warfare (ASuW) vessels. Designed to provide escort protection for other ships, the Navy has said these proved to be the “little ship that could” for enduring missions over the course of nearly four decades. The frigates conducted maritime interdiction operations, counter-narcotic efforts, and engagements with partner navies—thus fulfilling the Navy's Cooperative Strategy for 21st Century Seapower or Maritime Strategy.

The frigates were developed by the Navy to replace the World War II destroyers set to retire, and in order to meet the numerical needs that resulted in stringent design controls that were placed on the size and costs. As a result of “protracted periods of austerity,” the crews of the frigates faced spare parts shortages and even reduced maintenance support.

Along with the ships, the crews proved “they could” as well, and sailors assigned to the frigates—named after the hero of the naval Battle of Lake Erie, U.S. Commodore Oliver Hazard Perry—showed their determination, ingenuity and even grit to ensure the mission could be completed.

A total of seventy-one of the warships were built between 1977 and 2004 by Bath Iron Works and Todd Shipyards, and fifty-one saw service with the U.S. Navy. The last of those—USS Simpson (FFG-56)—was decommissioned in 2016, while many of the retired were either mothballed or transferred to other navies.

Currently, nearly three dozen of the Cold War frigates remain operational with such navies as Turkey, Egypt, Poland, and Chile. The Republic of China (Taiwan) remains the largest operator of the Oliver Hazard Perry-class with ten in service. In 2018, it was even announced that the United States. would offer the retired vessels to Ukraine after a large part of its navy was seized following the annexation of Crimea by Russia.

The Oliver Hazard Perry-class frigates were produced in two variants, known as “short-hull” and “long-hull,” with the later variant being eight feet longer than the short-hull version—either 445 or 453 feet in overall length, while both had a beam of 45 feet and a draft of 22 feet. The long-hull ships carried SH-60B LAMPS III helicopters, while the short-hull units carried the SH-2G. Both versions were powered by single shaft driven by 2 LM2500 gas turbines. Their maximum sustained speed was around 29 knots and the frigates had a range of 4,200 nautical miles at 20 knots. The ship’s active complement was fifteen officers and one hundred seventy-nine enlisted personnel.

The frigates were initially armed with one single-arm Mk 13 Missile Launcher with a 40-missile magazine that contained SM-1MR anti-aircraft guided missiles and Harpoon anti-ship missiles. It was removed from the U.S. Navy ships beginning in 2003, due to the retirement of the SM-1 missile from U.S. service. The loss of the launchers also stripped the frigates of their Harpoon anti-ship missiles.

In June 2009, Vice Adm. Barry McCullough turned down the suggestion of Rep. Mel Martinez (R-Florida) to keep the frigates in service, citing their worn-out and maxed-out condition. In the end, the vessels proved to be past their prime and with the retirement of FFG-56, the U.S. Navy was devoid of frigates for the first time since 1943.