Growler: Is This Jet the U.S. Navy's Secret Weapon? 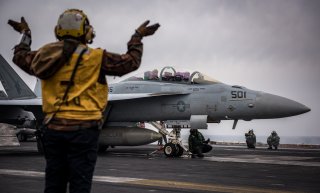 The United States Navy and defense contract giant Boeing have launched a five-year modification program that will keep the EA-18G Growler fleet flying high for years to come.

The defense contractor started its program with the induction of the first jet at Naval Air Station Whidbey Island this month, and the modifications are focused on updating the aircrafts' structural and mission systems architecture, which enable future capability growth for the Navy's 160 Growler jets.

The variant of the combat-proven F/A-18F Super Hornet, the Growler serves in a critical role in jamming radar and communications signals of threat forces, disabling their ability to detect and track U.S. and allied military forces. It is the most advanced airborne electronic attack (AEA) platform and is the only one in production today.

"We're excited to have the Growler industry team here working on capabilities that will bring the fleet enhanced electronic surveillance, enhanced data link and the ability to carry the Next Generation Jammer pod," said Capt. Chris 'Needles' Bahner, commander, Electronic Attack Wing, U.S. Pacific Fleet via a statement from Boeing. "We look forward to being a cooperative partner with PMA-265 and PMA-234 at Naval Air Systems Command and the Growler industry team on this exciting work."

Boeing announced that it will upgrade the entire fleet over the next five years, which suggests a target of about thirty per year. Full rate modification is expected to start in June 2021, and the company announced that it has positioned people on-site at Whidbey; following state, local, customer and corporate Covid protocols, to ensure the program is fully staffed to support the workflow.

The upgrade will expand the EA-18G's information pipeline and enhance the aircrafts' ability to transfer data more rapidly and more securely to other aircraft and platforms. It will also improve the speed of the data processing, while the upgrade will also prepare the Growler for the Next Generation Jammer, which greatly improves its electronic attack capability.

Following the contract awards from October 2020 and February 2021 for materials and labor, the modification work will include various upgrades for Growler mission systems. The aircraft's Northrop Grumman ALQ-218 receiver system will receive the Airborne Electronic Attack System Enhancements modification, enabling the Growler to operate in increasingly complex electromagnetic environments.

"As the world's premier electronic attack platform, we’re starting this program for the EA-18G Growler in solid partnership with the Navy," said Mark Sears, Boeing vice president of Fighters & Strike Product Support. "These modifications will position it to meet the threats of today and those in the future."

Flight Global reported that Boeing initiated design work related to upgrading the EA-18G in May 2019, and at that time, the defense contractor said the upgraded aircraft would be designated Growler Block II and include features such as the advanced cockpit system and conformal fuel tanks, as well as improved sensors and an upgraded electronic attack package.

The United States Navy is the main operator of the aircraft, while the only other operator of the Growler is the Royal Australian Air Force, which currently has eleven in service – a twelfth aircraft was lost in a January 2018 engine fire.