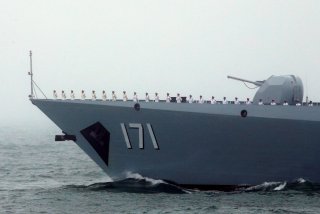 Here's What You Need to Remember: China’s Navy is already larger in size than the U.S. Navy, a circumstance which continues to inspire the growing chorus of U.S. lawmakers and military leaders calling for a 500 ship Navy. The U.S. currently operates more than sixty-six Arleigh Burke class DDG 51 Destroyers and plans to add many more upgraded Flight III variants.

China has taken another step toward doubling its fleet of destroyers from twenty up to forty within the next five years by adding two new Type 052 guided missile destroyers, bringing this year’s total up to four.

Within the span of just this year, the Chinese have also added two amphibious assault ships and now four destroyers to the fleet, sustaining an alarming shipbuilding pace which continues to catch the eye of the Pentagon.

The second newest destroyer, the Tangshan, is a Type 052 guided missile destroy reported to be the latest variant with a larger helicopter flight deck and larger “anti-stealth” radar, according to a report in the Chinese government-backed Global Times Newspaper.

In January of this year, the Chinese commissioned the Nanchang, a new, Zumwalt-like Type 055 stealthy destroyer.

What might all of this mean for China, beyond of course an increase in the ability to project power and wage war on the open seas? Most of this, it seems, would hinge upon the extent to which its sensors, weapons and networks were in any way comparable to U.S. destroyers.

Ultimately it is the technology that matters most. The merging of long-range sensors, precision-guided weapons, laser weapons and electronic warfare systems with a hardened, multi-domain network and integrated ship defenses will prove to be much more significant that sheer numbers of ships. Imagine if U.S. destroyers could have longer range weapons, more sensitive radar, better maneuvering cruise missiles and an ability to detect enemies from beyond the horizon before they are themselves seen. If the U.S. Navy could do that, then it seems they could achieve military overmatch with fewer numbers of actual ships.

China’s Navy is already larger in size than the U.S. Navy, a circumstance which continues to inspire the growing chorus of U.S. lawmakers and military leaders calling for a 500 ship Navy. The U.S. currently operates more than sixty-six Arleigh Burke class DDG 51 Destroyers and plans to add many more upgraded Flight III variants.

Navy Flight III Destroyers have a host of defining new technologies not included in current ships such as more on-board power to accommodate laser weapons, new engines, improved electronics, fast-upgradeable software and a much more powerful radar. The Flight III Destroyers will be able to see and destroy a much wider range of enemy targets at farther distances. For example, they will be armed with Maritime Tomahawk missiles: new variants of the famous cruise missile able to maneuver in flight and destroy moving targets at sea. Should the U.S. Navy operate weapons with this kind of capability, coupled with long-range, high-fidelity surveillance, it could destroy large numbers of Chinese destroyers from ranges as far as 900 nautical miles.

A new software and hardware enabled ship-based radar and fire control system, called Aegis Baseline 10, will drive a new technical ability for the ship to combine air-warfare and ballistic missile defense into a single system. For instance, the AN/SPY-6 radar, previously called Air and Missile Defense Radar, is engineered to simultaneously locate and discriminate multiple tracks.

Kris Osborn is defense editor for the National Interest. Osborn previously served at the Pentagon as a Highly Qualified Expert with the Office of the Assistant Secretary of the Army—Acquisition, Logistics & Technology. Osborn has also worked as an anchor and on-air military specialist at national TV networks. He has appeared as a guest military expert on Fox News, MSNBC, The Military Channel, and The History Channel. He also has a Master's Degree in Comparative Literature from Columbia University. This article first appeared last year and is being republished due to reader interest.