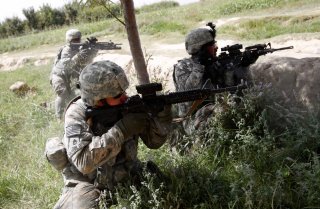 I remember the night because I remember the day that preceded it so well in my grunt life. It was a day of practicing anti-tank techniques during my army infantry basic training. On that day we gathered at what was termed the Anti-Tank Maneuvers.

It looked innocuous enough; nothing out there really, save a few barely detectible foxholes and a few badass M-60 Main Battle Tanks (MBT) parked in the holding area.  Their Detroit diesel engines made a thunderous growl and shook Ma Earth when the driver chowed down on the gas.

Our initial range safety and scenario brief taught us that we were to lay crunched in a  foxhole, let one of the M-60s run over the top of us, then spring up shooting an anti-tank rocket into its rear. That sounded like some serious John Wayne movie high jinks to me. For the rest of the boys, it was a mixture of hooahs and high-fives from the rowdies, and some saucer-eyed silence from the timider among the group.

“Ima jump up early and shoot that mu-phuquer in his face!”

“This… this doesn’t seem at all necessary… I mean, can’t we talk about this?”

“Ima jump up and whip that bad-boy in the ass with a rocket on each shoulder — blow  that turret right off the hull!!”

“C-c-couldn’t we do something less violet, like shout obscenities at the tanks from a  safe distance?”

“Who is responsible for this madness? The Army didn’t look this violent in the  pictures.”

And so it went.

I was painfully aware of the acute and definitive schism that existed between gung-ho and the chicken-shit of our group. Me, heck yeah I wanted to do it. The anti-tank weapon in play for the shoot was the 66mm Light Anti-Tank Weapon (LAW), or just the  “LAW rocket.”

Ours was a training LAW that was fitted with an internal sleeve that housed a sub-caliber shot that gave a great firing signature and actually launched a small projectile with reasonable accuracy that had a puff-of-smoke market that lets you know if you hit your target or not.

“Ima lay down the letter of the LAW to this tank, bubbas!” I shouted trying to fit in with the banter. Nobody laughed or high-fived me, reserving the moment to offer only confused looks to my remark. I didn’t panic; I rethought and retooled my delivery for  another shot:

(slight pause…) “HOOAH, HOOHAH *SLAP-SLAP-SLAP* HOOAH, HOOAH, *SLAP*” I was a king! And this was my Grunt life.

We all took our turns. I admit my confidence waned just a smidge as the behemoth rolled over me, what with the maddening roar, the quaking of the ground, and the sudden darkness in the fox hole. After some three seconds, I popped up and just pointed my LAW without aiming and cracked off and decent hit.

Over the sound of Detroit’s finest diesel, we could hear the unfortunate and doleful wailing of the non-believers when the tanks ran them over. Still, most managed to pop up and get their shot off — save one poor wretch who never popped up, and when they checked on him he was rolled up like a little roly-poly bug sobbing.

He was a badass and cool at the same time. For our C-Ration lunch he built himself and sat on a “throne” out of C-ration boxes — not the cases, but the individual 8” x 8” x 4”  individual box meals. He had us file by and pull out one each, continuing this way until  his throne finally collapsed out from under him and he subsided into the pile of boxes, laughing and crying out:

It’s the simple things in life that carry us through, my friends.

Then there was “the night.” Several of us discovered that if we slept under our bunks on the floor at night we wouldn’t disturb the bunks and wouldn’t have to meticulously prepare them for inspection the next morning. That forded us more time for shaving and such, plus we would avoid the risk altogether of failing yet another bunk inspection.

That idea backfired when the night orderly found us sleeping on the floor and reported to the nightly Staff Duty Officer (SDO):

“Sir, the men are sick; they are feverishly hot and sleeping on the floor to try to stay cool!”

“My God, Corporal… round those men up and get them to sick-call ASAP!”

Next I knew, some bro was pulling me out from under my bunk to my confusion.

“Come on, man… we’re going to sick-call right now! The SDO ordered us to go.”

What the heck did I know — I thought I was being taken to the clinic to do some kind of special work detail; nobody ever asked me if I was sick or explained why we were going there. One just did as they were told and didn’t ask questions in Basic Training.

At the clinic we six men sat in the waiting area murmuring about the situation. We all admitted to each other that we felt fine and were only sleeping on the floor to avoid making our bunks the next morning. We agreed to just go through the motion at hand and never admit the true reason for sleeping on the floor.

“What are your symptoms, soldier?”

“Then why did you come here, soldier?”

“Because the SDO ordered me to come here.”

“Why did you tell him you were sick, soldier?”

The less-than-enchanted doc was hollering over the phone in no time. We six sickos just sat and waited for our ride back to the barracks. As we sat, a gruff sergeant entered the clinic, saw us six sickos sitting there and barked:

“You privates there… I need you to do some work for me right now.”

“Uh… we’re here because we’re sick, said one of the boys.

“HOW SICK IS SICK?? I need you men to unload a truck for me right now!”

The Sarge showed his grumbling self the way out.

It was Before Morning Nautical Twilight (BMNT) when we got back to the barracks. All the boys were already filing out for breakfast. We were allowed to hit the racks and sleep, talking the day off from training. It was a grand and glorious day hanging out in the barracks in our skivvies all day just breaking balls.

The only thing that broke the calm momentarily was the sound of the door being thrown open, and there stood the less-than-tickled-pink SDO. We all jumped to attention.

‘His eyes blazed with crimson fire

where he stood there grim and sour by the door

He was brazen curt and dire

by the grim and sour countenance he bore.’

“Why in purgatory… did you men tell me you were sick??”

At length, the less-than-delighted SDO gave himself leave, and we all sighed a breath of un-sick relief.

Yessirree… it was good. Yes, good to be King if only for just one day, in Ft. Benning, Georgia, in a barracks… in one’s skivvies.

By almighty God and with honor,