Guam-Killer: China's DF-26 Ballistic Missile Could Be Even More Deadly If Armed With Nuclear Warheads 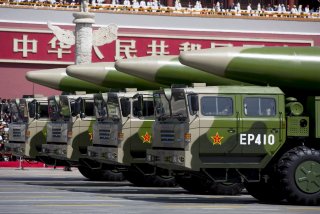 Here's What You Need to Remember: Uncertainty as to whether an incoming DF-26 missile is carrying a nuclear or conventional warhead could inadvertently trigger an escalation to nuclear retaliation by the United States.

This article first appeared a few years ago and is being republished due to reader interest.