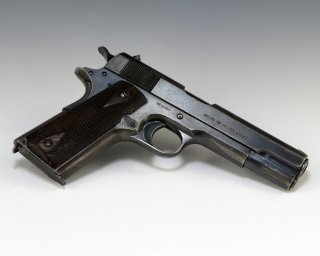 Here's What You Need To Remember: There is a temptation to directly compare the 1911 and Glock handguns, but the two really are a form of apples and oranges. The 1911 is a historical artifact with a level of modern utility as a tool. The Glock is a modern tool. Some people enjoy apples, others enjoy oranges, and others still enjoy both.

Kyle Mizokami is a defense and national security writer based in San Francisco who has appeared in the Diplomat, Foreign Policy, War is Boring and the Daily Beast. In 2009 he cofounded the defense and security blog Japan Security Watch. You can follow him on Twitter: @KyleMizokami. This first appeared two years ago.