Has China Changed the Hypersonic Calculation? 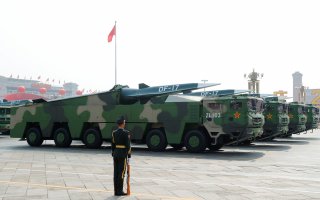 Here's What You Need to Know: Hypersonic missile technology is being developed by many countries, including the United States and Russia.

In a big surprise last month, it was reported that China recently tested a nuclear-capable hypersonic missile. However, China has denied that anything like that happened.

The missile, back in August, “circled the globe before speeding towards its target, demonstrating an advanced space capability that caught US intelligence by surprise,” according to the Financial Times.

The Financial Times, citing “five people familiar with the test,” said that China launched a rocket that “carried a hypersonic glide vehicle which flew through low-orbit space before cruising down towards its target.” Sources also told the publication that the missile “missed its target by about two-dozen miles.”

“Hypersonic glide vehicles . . . fly at lower trajectories and can manoeuvre in flight, which makes them hard to track and destroy,” Taylor Fravel, an expert on Chinese nuclear weapons who works at the Massachusetts Institute of Technology, told the Financial Times.

Reports about missile launches from countries like North Korea often come immediately after the fact, usually because the country responsible immediately touts them. With the reports of the missiles by China, however, it took around two months.

However, according to the BBC, China is denying that it tested a hypersonic, nuclear-capable missile.

“This was not a missile, this was a spacecraft," Chinese foreign ministry spokesman Zhao Lijian said Monday, according to the BBC. "This is of great significance for reducing the cost of spacecraft use.”

Hypersonic missile technology is being developed by many countries, including the United States and Russia. North Korea claimed a successful hypersonic missile launch in September, but experts have argued that the launch wasn’t fast enough to be considered hypersonic. Hypersonic typically means that something moved at five times the speed of sound.

The New York Times, in a report published on October 17, looked at the feeling in Washington that a new Cold War, this time with China, may be in the offing.

“Yet the question of whether the United States is entering a new Cold War is about more than just finding the right metaphor for this odd turn in superpower politics. Governments that plunge into a Cold War mind-set can exaggerate every conflict, convinced that they are part of a larger struggle,” according to the Financial Times. “They can miss opportunities for cooperation, as the United States and China did in battling Covid-19, and may yet on the climate.”

“And the issue of whether this is a Cold War, or something quite different, lurks just beneath the escalating tensions over economic strategy, technological competition and military maneuvers—undersea, in space and in cyberspace,” according to the Financial Times.

Earlier, the South China Morning Post reported that Chinese military researchers were looking to use AI technology in order to increase the accuracy of its hypersonic weapons.

“PLA missile scientists say the accuracy of hypersonic weapons could be improved by more than 10 times if control is taken out of human hands and given to a machine,” according to the South China Morning Post. “Their paper, published last week in the peer-reviewed journal Systems Engineering and Electronics, proposes using artificial intelligence to write the weapon’s software ‘on the fly’ through a unique flight control algorithm as it travels at hypervelocity.”

This article first appeared in October 2021.