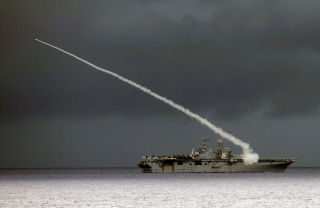 Here's What You Need To Remember: The Air Force is working with Lockheed Martin do further develop hypersonic vehicles, and the Defense Advanced Research Projects Agency is further developing the appropriate engines after stopping research in 2010–2011. A step in the right direction. Still, let’s hope it’s not too little, too late.

As recently detailed, Russia’s new hypersonic Zircon missile will soon be submarine based. This diversifies Russia’s hypersonic capabilities—from air and at sea, to underwater, for greater strategic advantage. America and U.S. allies beware.

Evasive maneuvers are difficult against hypersonic weapons because the weapons themselves are highly maneuverable. Using kinetic interceptors to shoot down a hypersonic missile would be like shooting a bullet with a bullet. Further complicating the problem is the fact that most missile defense systems are generally optimized to counter specific, existing threats and hypersonics traveling close to two miles a second are just not on their menu.

One of the truly frightening aspects of hypersonic missiles are the potential stealth capabilities inherent to some of their design. Because they move so quickly through the atmosphere, such missiles generate a plasma field around themselves that is radar absorbent, making them harder to detect. Bad news for aircraft carriers, cities, or other potential targets.

One word: survivability. Russia is apparently the first country to field submarine-based hypersonic missiles. This arrangement is particularly dangerous because submarines can hide underwater for days, or even weeks. Submarines are highly protected if they stay below the surface, and very hard to detect, especially if a sub commander is willing to sail slowly, or not at all.

Like conventional submarine-based ballistic missiles, shooting a hypersonic missile at a target on land or at sea could happen very quickly, without even needing to surface. Blisteringly high speed, combined with close proximity to targets that submarines can provide would give an opponent a laughably low reaction time.

The United States is falling behind. Michael D. Griffin, the current serving Under Secretary for Defense and Engineering has repeatedly spoken on Capitol Hill about the plight of the United States in relation to its adversaries in the realm of hypersonics. “We, today, do not have systems which can hold them [Russia and China] at risk in a corresponding manner, and we don’t have defenses against those systems…Should they choose to employ them, we would be today at a disadvantage,” he said. “We’re playing catch-up ball.” Not a great game to be playing.

His comments are supported by the findings of the Congressional Research Service (CRS). In fall of 2019, the CRS, Congress’s think tank, released a report that detailed the hypersonic state of the art. Their firm conclusion was that Russia is seeking to perfect maneuverable hypersonic weapons to perforate American missile defense and, therefore, to ensure a measure of “strategic stability” in relation to the United States. According to CRS, Zircon will be operational by 2023.

The Air Force is working with Lockheed Martin do further develop hypersonic vehicles, and the Defense Advanced Research Projects Agency is further developing the appropriate engines after stopping research in 2010–2011.

A step in the right direction. Still, let’s hope it’s not too little, too late.