Have Carrier "Battle Groups" Become a Necessity for the U.S. Navy? 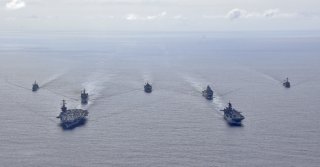 Here's What You Need to Know: When shaping the fleet, a battle-minded navy would prize sensors, armaments and tactics for surface and antisubmarine warfare. Reconverting strike groups to battle groups would demand simple measures—albeit measures that are hard to implement amid stringent budgets.