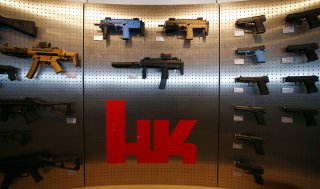 Here's What You Need to Know: Not only is the SP5 accurate, but it’s also very reliable. Throughout over 1,000 rounds of ammo, the pistol ran flawlessly both with and without a suppressor.

The HK SP5 is really the only pistol worth comparing to the MP5. Since it’s almost completely illegal for people to own automatic machine guns in the United States, Heckler & Koch made the semi-automatic SP5 as a nearly identical alternative.

The SP5 features a Picatinny rail, which makes it easy to attach a variety of accessories such as suppressors, lights, night sights, and other optics. The standard iron sights include a fully-protected front post and an adjustable rear circular drum. Thanks in part to the fluted barrel and new-and-improved F Bolt-Carrier Group, the SP5 is incredibly accurate. It’s very easy to fire and control—my average five-shot group from 25 yards was just under one inch, with multiple types of ammo tested!

Not only is the SP5 accurate, but it’s also very reliable. Throughout over 1,000 rounds of ammo, the pistol ran flawlessly both with and without a suppressor. HK’s iconic three-lug, hammer-forged barrels are perfect for attaching almost any kind of suppressor, and it even includes ½ x 28 threads for doing so.

Thanks to the roller delayed blowback operating system, the SP5’s recoil impulse is very smooth. Two rollers on either side of the bolt are recessed into the indentations on the receiver, which builds pressure in the chamber when you fire. Then, the rollers unlock to allow the bolt to move back. This innovative system allows more pressure to escape from the barrel, lightening the recoil enough to allow consistent, precise follow-up shots.

The SP5 is fully ambidextrous, with a paddle magazine release on the left and a release button on the right. In the box, you’ll find two thirty-round magazines. The trigger group is HK’s most up-to-date design and another high point of the SP5. The steel trigger and hammer (with a roller sear) allow for smooth trigger movement. The average pull is around 7.5 lbs with minimal travel and no movement after the trigger breaks.

The barrel on the SP5 measures just about 8.9”, bringing the overall length to 17.8”. It weighs 5.49 lbs with an empty magazine and 7 lbs with a loaded magazine. Retailing at about $2,800, it’s definitely not a budget pistol, but it’s well worth the money for a handgun that’s as close to the MP5 as possible! If you’ve always dreamed of owning this legendary pistol, the SP5 is the closest thing you’ll find that’s both safe and legal.