Helmet History: From the British Dragoons to Household Cavalry 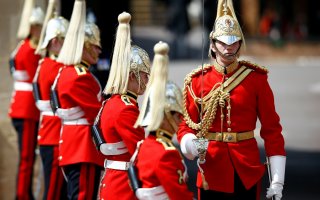 Here's What You Need to Know: The steel helmet has a long history.

Ask the average armchair historian when the modern steel military helmet was introduced, and they’re likely to answer that it was the First World War that the helmet made a return to the battlefield. But that’s actually the wrong answer because it was a trick question. Despite the widespread belief that armies in large numbers didn’t use helmets, the truth is that the metal helmet never actually disappeared from the ranks of soldiers. At the outbreak of the First World War, heavy cavalry troopers were still wearing uniforms quite similar to those that were worn a hundred years earlier during Napoleonic times.

Although in some armies, notably the British Army, the metal helmet had been relegated to parades and ceremonial duties, the fact is that the nations of Germany, Russia, and France fielded cavalry units still sporting not only the metal helmet but also the metal breastplates, known as cuirass. The units that wore this late age armor and helmets made up the core of the era’s heavy cavalry, and while not limited to, these included the Dragoons and Cuirassiers.

The Cuirassiers were actually born out of the late Middle Ages’ men-at-arms, who wore three-quarters armor for the upper body as well as the legs. The helmets evolved from the later era lobster tail pots to a simpler harquebusier helm. This was mostly due to cost, with the latter helmets costing less than half as much as the heavier helmets.

Over time the Cuirassiers were reduced to just a simple breastplate and metal helmet. At times various nations discarded the armor temporarily, but most retained the metal helmets. During the Napoleonic Wars, the helmets evolved dramatically—and in part as Napoleon saw himself as a new Emperor of Rome, he equipped his Cuirassiers and Dragoons with a helmet that resembled a Roman-style helmet. This pattern evolved over time, and interestingly was adopted by the Paris Fire Brigades, and in turn became the inspiration for the Adrian pattern steel helmet used in the First World War.

But today while many nations have entirely retired the cavalry helmets, these Roman-style ones do live on with the Coraceros de la Guardia Real of the Spanish Royal Guard and the Italian Corazieri, the honor guard of the President of Italy. And another pattern, the Heavy Cavalry helmet is still in use in Great Britain as the ceremonial headdress of the Household Cavalry.

One aspect of Dragoons is that while these were mounted troops, originally these men were not always technically cavalry. Originally, Dragoons were organized as mounted infantry, which meant that while they were trained in horseback riding, they also fought as infantry, often dismounting for battle. One theory is that Dragoons earned their moniker from the early type of firearms carried by the earliest of these troops. The weapon was called a “dragon” and in some languages—notably French, Portuguese, and Spanish—there is no distinction between the words dragon and “dragoon.”

Another interesting aspect of the evolution of cavalry units is that Dragoons essentially evolved to become part of the “light cavalry” in many European armies. The notable exception of course is the British Army, where the Dragoons divided into Heavy and Light Cavalry Regiments, with the Dragoon Guards and Dragoons filling the former role, while the Light Dragoons serving as Light Cavalry.

In Britain, the Dragoon Guards were descended from the Cuirassiers of the seventeenth century. These men were completely covered in armor, but as the modern military evolved the armor was dropped to make for a more mobile force. By the War of the Spanish Succession in the eighteenth century, the British Army was truly armor-less, but readopted armor for some units during the conflict.

Even the helmets disappeared for a period, to be replaced with cocked hat and later a black leather peaked helmet. During the Napoleonic Wars the British Heavy Cavalry wore leather helmets with metal peaks and combs, and following the war helmets made a true charging comeback. In 1818 the British Dragoon Guards adopted a “Roman” style peaked helmet that included a metal skull with gilt leaf decoration. The peaks were bound with gilt brass trim, and the chinscales were ornately decorated and attached to the helmet at the side with large lionhead bosses.

This version was followed by what some have described as “the most beautiful of all British cavalry helmets” in 1834; a helmet with a skull and peak of gilt metal with a large rayed plate bearing the Hanoverian Royal Arms, which were used until the accession of Queen Victoria in 1837. The top of the skull featured a highly ornamented gilt metal comb to which could be attached a black fur crest, or a metal finial in the shape of the forepart of a lion. It made for a unique helmet that came into service as the nation transitioned to the Victorian Age.

It was Queen Victoria’s husband, Prince Albert who changed the look of the Heavy Cavalry with the introduction of the 1842 “Albert” Pattern Helmet. This nickel-plated helmet pattern was first adopted by the Household Cavalry, the units that are still famous today for their ceremonial duties guarding the monarch and taking part in the daily changing of the guard. While not Dragoons, these regiments do retain the look and dress of continental Cuirassiers, complete with the ceremonial breastplates. These remain the most senior regiments of the British Army, and have traditions dating back to 1660.

The first “Albert” helmet took on the shape of the tall leather pickelhaube (spiked helmets) that were adopted by the Prussians and Russians around the same time. Instead of a metal spike, however, these helmets were adorned with a tall plume in a brass plume holder and were made of German silver with gilt ornaments. At the front of the helmet was an oak-left band covering the front seam joint, and for officer’s helmets, this included an enameled plate, while for other ranks it was a simpler silvered plate.

The seven Dragoon Guard as well as the 1st and 6th Dragoon regiments adopted a similar pattern helmet in 1847 and which was brass (or gilt). For the officer’s of the Dragoon Guards, the badge was a cut metal star in silver mounted on a brass shield. In the center in gilt brass was an oval, surrounded by a garter with the regimental title, and the Royal monogram, VR. A chinchain of brass links completed the pattern and was attached to the side of the helmet on brass rosettes.

This pattern helmet was revised in 1855 as the second “Albert” pattern, and in addition to some slight changes in the design this is notable for the change in the color of the horsehair plumes. Prior to this time, all the regiments wore black horsehair plumes, but with the new regulations, each of the seven regiments received a distinct color (which would see slight modifications overtimes, notably as units were eventually amalgamated).

The helmet pattern was changed a final time in 1871, and it is worth noting that while still retaining the basic shape of the earlier patterns, this version lacks the “Albert” moniker, as the Prince Consort died in 1861. However, his early influence on the Household Cavalry and Dragoon helmets lives on to this day, with the 1871 pattern helmet still in use by the heavy cavalry regiments. The Dragoon Guard/Dragoon other ranks helmets featured a plate with a plain starburst ray in white metal with a garter belt in center with the motto “Honi soit qui mal y pense” around it in brass and the regimental number in the center.

The Household Cavalry wore a white metal helmet, while the Dragoons adopted a helmet of the same basic pattern, with a few notable differences. The 1st and 6th Dragoon Guards wore a white metal helmet, while the Dragoon Guard Regiments wore a brass helmet version, with the exception of the 2nd Dragoons, who wore a bearskin. Additionally, to further complicate matters and confuse collectors, Dragoon style helmets were also utilized by another group of British soldiers, these being the Yeomanry Cavalry, later changed under the Militia and Auxiliary Forces Act of 1901 to Imperial Yeomanry for those who chose to serve overseas. These “volunteer” troops were essentially part-time soldiers, but they retained a smart look with the cavalry units issued tall silver helmets. Whereas the Dragoon Guards other ranks helmets featured a badge with the number, the Yeomanry featured a silver faceted star on which was mounted the arms of the respective Yeomanry county. This made for a sharp-looking helmet with a distinct iconic plate.

All this has unfortunately made for some confusion for collectors and many helmets are clearly mismatched, with Household Cavalry helmets passed off as Dragoon helmets and vice versa. Likewise, parts—notably plumes—are often interchanged (and quite different with Dragoon plumes having a wider “part” at the front), while parts from officer’s and other rank’s helmets are also often mismatched over the years. As such collectors are advised to do their research for the helmet’s basics. More worrisome is that in recent years, high-end - and sadly not-so-high-end - copies and outright fakes have been produced in India and China. These typically lack the craftsmanship of earlier helmets, and sometimes these are sold as “current issue,” which of course they are not. While the helmets are still used by the Household Cavalry and even some Dragoon bands, the real ones are vastly superior in quality, and here is where the devil is in the details!