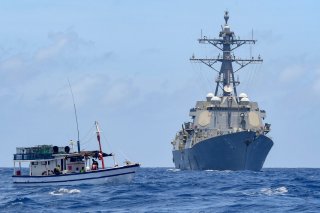 Here's What You Need To Remember: The Navy wants higher numbers of longer range, high-speed precision weapons to be ready for the next war.

The Navy wants higher numbers of longer-range, high-speed precision weapons to be ready for the next war, to include missiles, attack platforms, guns, and non-kinetic weapons such as EW and cyberwar assets.

The reason would seem clear enough, as it likely pertains to the massive military modernization and weapons enhancement taking place in places like China, Russia, Iran and North Korea, among others.

While certainly a need or interest in modernizing weapons would not seem unusual, new, or surprising in any way, yet the recent calls for an accelerated or stepped-up effort do seem constitute an interesting potential shift, if even a small one.

The strategy, articulated in the context of maritime warfare in Chief of Naval Operations Adm. Michael Gilday’s recently unveiled CNO NAVPLAN document, specifies a series of desired weapons characteristics, to include increases in “range and speed, volume and tempo of fires, magazine depth, mobility of forces, stealth, deception, and sustainability.”

“In this fight, the number, and type of munitions matters. We are developing and fielding more options to deliver lethal and non-lethal effects on maritime, air, space, and shore-based targets. These include missiles, torpedoes, mines, cyber weapons, and devices that target the EM spectrum as well as seabed and subsea systems,” Gilday writes in his strategy.

Upon closer examination, there is little ambiguity as to why “range” would be at such a premium. The most effective weapons platforms in recent years are deemed successful in large measure by virtue of having the ability to out-range an enemy. The F-35, for instance, is credited with demonstrating a technical ability to employ its targeting sensors and ISR technologies to find and detect enemies before it is itself discovered. In one Air Force exercise, an F-35 succeeded in destroying a large number of “red team” enemy assets with itself being detected, due to the range, image fidelity and resolution of its sensors and targeting systems. A platform, servicemember, or weapons system that simply cannot be detected, found or seen, due to not being “in range,” cannot be destroyed.

Such a dynamic bears heavily upon maritime warfare in particular, as a carrier-launched F-35C or amphib-launched F-35B could completely change attack tactics if it could find and attack enemy ships, aircraft or coastal sites for amphibious landings, while remaining undetected. Perhaps an F-35 could see and destroy a small group of fast-closing enemy fighter jets seeking to attack a Navy ship formation?

Range is also the reason why the Navy is up-arming its surface fleet with a new generation of weapons, to include a Naval Strike Missile (NSM) “over-the-horizon” missile for its Littoral Combat Ship, range-trippling, more precise ammunition for its deck-mounted 5-inch guns, fast-arriving hypersonics and software upgrades to its SM-6 and SM-3 ship-launched missile which massively expand attack range and targeting discrimination technology.

From the air, the Navy is now also extending weapons range for its carrier-launched air assets such as its F/A-18, which can now fire the semi-autonomous Long Range Anti-Ship missile, called LRASM. The weapon not only incorporates newer iterations of semi-autonomous navigation and targeting technology but also reaches ranges as far as 200 nautical miles, a dynamic that naturally greatly impacts the tactical attack envelope for F/A-18s.

Interestingly, a recent report in UPI cites recent developments with the Naval Strike Missile, reporting that the Navy plans to arm its fleet of amphibious assault ships with the weapon.