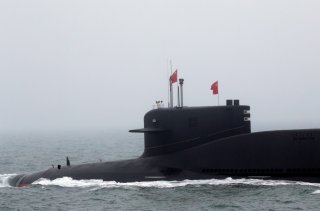 Here's What You Need to Remember: The Yu-6 (鱼-6) is China’s latest sub-launched torpedo. After the Yu-5, PLAN leaders realized that separate ASW and ASuW torpedoes were obsolete, and deemed their next torpedo to be dual-purpose, similar to the Mk 48.

The current fleet of Chinese sub-launched torpedoes represents an interesting blend of Soviet, American, and commercial off-the-shelf (COTS) technology. From the Yu-4, a domestic completion of an incomplete Soviet design, to the Yu-6, which uses an Intel microprocessor to power its guidance components, the torpedoes of the People’s Liberation Army Navy (PLAN) show significant traces of reverse engineering. But how capable are they? Do they really improve on the designs on which they are based, and effectively integrate COTS technology, or stand up to the designs from which they were reverse engineered?

The first torpedo fielded by the PLAN for sub-to-sub (ASW) combat was the Yu-3 (鱼-3). As part of the development program for its fleet of nuclear submarines, the PLAN needed an ASW torpedo. Design began in 1964, with sea trials beginning in 1972 and mass production in 1984. Almost all technology and design was indigenous. The torpedo itself is rather lackluster for one adopted in 1984, puttering along at thirty-five knots and using solely passive guidance. The only “advanced” feature was the torpedo’s ability to circle back and reacquire the target if it missed on the first pass. It was later modernized in 1991 to use active/passive guidance. Some sources also state that it was given wire guidance at this time. Overall, it was far inferior to its 1980s Western or Soviet counterparts.

The Yu-4 (鱼-4) torpedo can be thought of as China’s first modern anti-ship (ASuW) sub-launched torpedo. Its story begins in 1958 when the Soviet Union struck a deal with the PRC to transfer technology that could be used to build electric torpedoes. The designs and know-how to build the then-current Soviet SAET-50 passive-homing electric-powered torpedo was transferred, but the transfer was not completed before the Sino-Soviet split occurred. As a result, the Chinese engineers attempted to continue with the incomplete technology but ran into issues, including various explosions during testing and trials. Thus, the project was then shelved until 1966 when development was restarted. Five prototypes of the original Yu-4 were presented to the PLAN in 1971, but they were not accepted into service due to insufficient fusing reliability and excessive noise.

The Yu-4 was finally accepted into service as the Yu-4A (simple passive homing) and Yu-4B (active/passive homing) torpedoes in 1984. The Yu-4B has a speed of around forty knots, a range of up to fifteen kilometers, and a warhead of 220 kilograms of high explosives. This is superior to the SAET-50 and SAET-50M, but is about on par with the performance of the SAET-60M, which finished Soviet development in 1969, far before the Yu-4A/Yu-4B. Compared to its American contemporary of the 1980s, the Mk 48—which can reach speeds of fifty-five knots—the Yu-4 is very slow. However, it is superior to the Mk 37 torpedo, the U.S. Navy’s last electrically powered torpedo, which went only twenty-six knots. Due to its relative obsolescence, the Yu-4 is largely relegated to reserve roles in the PLAN. Some rumors state that Yu-4Bs have been turned into CAPTOR-type mines. This would make sense, as the PLAN’s current doctrine puts emphasis on A2/AD capabilities.

The capture of an American Mk46 Mod 1 torpedo by a Chinese fisherman in the South China Sea in 1978 was a game-changer for Chinese torpedo design. While the Mk46 was directly copied as the Yu-7 (鱼-7) air-launched torpedo, its technology also was used in submarine-launched designs. Notably, Chinese engineers quickly adopted the Mk46’s Otto Fuel II technology to make their own torpedo-propulsion units more compact and powerful. The Yu-5 (鱼-5) was the first Chinese torpedo to incorporate Otto Fuel II technology. The Yu-5 was also the first Chinese torpedo to use wire-guidance technology, allowing the operator to steer the torpedo more precisely to a point near the target. The seeker was improved as well, incorporating American and Japanese electronics, although to the degree to which this happened is unknown.

Given that Yu-5 development happened in the 1980s, and limited Mk46 technology transfer happened with the United States, it’s possible that the PLAN augmented the information from the reverse-engineered Mk46 with technology-transfer information to help build the Yu-5’s seeker. Notably, the Yu-5 was also the first ASW submarine-launched torpedo fielded by the PLAN’s diesel-electric submarines. The prior Yu-4 design was only ASuW capable, and the Yu-3 ASW torpedo was only fielded on the Chinese nuclear sub fleet. With the incorporation of wire guidance, Otto Fuel II, improved seeker, and ASW capability, the Yu-5 was considered a revolutionary torpedo for the PLAN submarine fleet when it was adopted in the early 1990s. It was later modernized throughout the nineties and aughts, but information on those updates is unclear. The Yu-5 has a range of thirty kilometers and can reach speeds of fifty knots. This is closer to its 1990s contemporary, the Mk 48 ADCAP (Advanced Capability), but still slower.

The Yu-6 (鱼-6) is China’s latest sub-launched torpedo. After the Yu-5, PLAN leaders realized that separate ASW and ASuW torpedoes were obsolete, and deemed their next torpedo to be dual-purpose, similar to the Mk 48. It was also to have improved speed and seeker technology. More than two-thirds of the technology used in the Yu-6 was supposed to be “new” technology. It utilizes Otto Fuel II like the Yu-5 and uses an Intel 80468 microprocessor for guidance. Homing modes include active and passive as before, but also a “wake-homing” mode that was added, possibly with Russian assistance. It also uses a novel synthetic material shell.

The Yu-6 completed development in 2005. At speeds of sixty-five knots, it is faster than the listed speeds of the Mk 48 Mod 6 ADCAP. However, the latest versions of the Mk 48 have been focused on resistance to countermeasures and low sonar signatures. It’s unlikely that the Yu-6 can match the Mk 48 Mod 6 or Mod 7 CBASS in these aspects.

Charlie Gao studied political and computer science at Grinnell College and is a frequent commentator on defense and national security issues. This first appeared in 2018 and is being reposted due to reader interest.