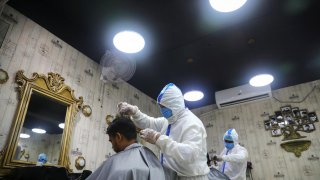 With an unemployment rate currently over 10 percent and many businesses permanently closing due to the pandemic, policymakers should make it as easy as possible for unemployed workers to find new opportunities.

State policymakers have tools at their disposal that could help put the unemployed back to work by eliminating barriers that prevent workers from moving between careers. Despite a wave of deregulation early in the COVID-19 crisis, many states still have occupational licensing requirements on the books that are hindering economic recovery by choking off access to new jobs, hindering interstate mobility for workers, and increasing costs for consumers.

The often lengthy and costly process involved in getting a license to practice hair‐​braiding, nail care and many other trades represent a significant barrier to would‐​be small business owners who cannot afford the time or expense involved. Nearly two million jobs are lost annually due to licensing requirements — a burden that falls hardest on low‐​income communities.

Despite claims by licensing proponents, studies looking at a wide variety of professions have found that the licensing process does not significantly protect public health and safety. Some research has even found that licensing has a slightly negative effect on quality. But, while quality remains unchanged, prices to consumers increase. According to economist Morris Kleiner, licensing can raise prices anywhere from 5 to 33 percent depending on the type of occupation and location. It is estimated that consumers pay, in total, $200 billion annually in extra costs due to licensing.

And forget easily moving your business from one state to another. Most states will not recognize an occupational license from another state, requiring entrepreneurs to go through the costly hassle all over again.

As a result, both the current and previous administrations have called for licensing deregulation. Licensing reform is one of the major aspects of President Trump’s Governors’ Initiative on Regulatory Innovation.

States have slowly begun to act. In signing legislation that allows his state to recognize licenses from other states, Missouri Governor Mike Parson said, “Eliminating governmental barriers to employment and allowing citizens to become licensed faster is an impactful, commonsense step that we believe will have a positive impact in the lives of a lot of Missourians.”

Arizona enacted similar reforms last year. Iowa has also created a universal licensing system with hopes of increasing migration into the state. Several more states, including California, Florida, and Missouri, have made it easier for people with criminal records to receive licenses. Florida has loosened other licensing requirements as well, as has South Dakota.

While those reforms are a good first step, all states can and should go further, reviewing all current occupational licensing requirements with an eye toward standardizing requirements, reducing costs, and eliminating restrictions that are not related to public safety.

The pandemic has created a unique window of opportunity for reform, forcing states to reevaluate the impact of regulations on jobs and poverty. States should seize on this opportunity to expand the freedom to work.

This article by Michael D. Tanner and Kelley Lester first appeared in CATO on August 3, 2020.