Here's Why America's Economy Will Recover From Coronavirus Before China's 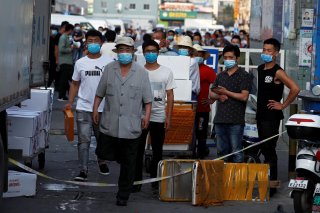 The U.S. is slowly opening back up for business. But we’re far from coming out of this tunnel. About 20 million Americans remain unemployed compared to just six months ago.

Despite this sobering number, we can take heart in a silver lining: The U.S. will recover, and it’ll recover before China, the place of origin for the new coronavirus that causes COVID-19.

Recovery can mean a lot of things. Generally speaking, let’s assume it’s a return to pre-COVID-19 levels of gross domestic product and regaining at least 80% of economic activity lost during the first half of 2020.

One of the reasons why the U.S. will recover before China is simply because of our consumer culture.

It’s something that’s often disregarded by critics of capitalism. But it’s now a culture that Chinese officials wish their citizens could emulate.

Chinese Premier Li Keqiang says to increase consumption, albeit with an emphasis on domestically produced goods.

Last year, Americans spent $14.5 trillion in personal consumption or roughly 70% of all economic activity (as measured by GDP). That’s money spent on retail, dining out, and services.

Consumption in China has increased steadily over the past 20 years but still falls short of matching the U.S. Last year, roughly 58% of all Chinese economic activity, or GDP, was consumption.

Simply put, Americans tend to have more disposable income, and it shows in our trade deficit too.

Because stores have been closed, retail sales in both countries have waned since the beginning of the year. The sale of goods in China is down 16% so far this year (through April), while the U.S. experienced a dip in the sale of goods only in April (18%).

Chinese officials tried issuing retail vouchers to offset the double-digit decline, but that money mostly is being spent on food, which has become increasingly expensive in China.

Food prices in China have jumped because of higher demand and the lagging effect of last year’s Africa swine flu, which killed a quarter of China’s pig population. The price of pork has almost doubled, increasing the price of substitutes such as beef and lamb as well.

That’s not the case in America, where the cost of food hardly has risen because of excess supply.

A big miss for China was the canceling of its Lunar New Year celebrations. The weeklong holiday historically makes up roughly 3% of annual consumption. Last year, the holiday generated over 1.5 trillion yuan (roughly $217 billion) in retail and food service sales, movie tickets, and tourism.

The next big consumption holiday for China won’t be until Nov. 11, and by that time the U.S. will be gearing up for its own holiday spending.

Both economies have shown small signs of what recoveries could look like. But after experiencing historic drops in our respective GDPs this year (U.S. -5%, China -6.8%), we’re still worlds apart.

And although the U.S. unemployment rate is 13%, U.S. companies hired 2.5 million employees between April and May.

China has an urban unemployment rate of around 6%, but 75 million people who migrate between provinces for work are unaccounted for. One estimate suggests that China’s real unemployment rate is closer to 20%, or 70 million.

China’s economic outlook for 2020 looks bad enough that the National People’s Congress just dropped its annual target for gross domestic product. This may be a good thing, however, given that Chinese officials previous have lied about economic growth to meet this arbitrary target.

Americans’ propensity to spend is what will help bring us out of this recent slowdown, unlike in China. Of course, Americans should remain vigilant about their safety and the safety of others to avoid a second wave of infection and economic hardship.

This article by Riley Walters first appeared in The Daily Signal on June 12, 2020.