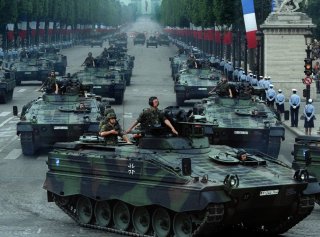 Here's What You Need to Remember: What it lacked in firepower, it made up for in numbers and speed, where groups of Panzer IIs could encircle enemy units.

As Nazi Germany began to openly rearm its military in the late 1930s, it introduced the Panzerkampfwagen II—more commonly known as the Panzer II—largely as a stopgap while more powerful tanks such as the Panzer III and Panzer IV were being developed. However, the Panzer II went on to become one of the most numerous armored vehicles employed in Germany’s Panzer divisions at the beginning of the war.

Its development began before Germany had learned valuable experience in tank warfare during the Spanish Civil War (1946-39), and it was soon apparent that the Panzer II lacked the armor for the modern battlefield.

Yet, even when the light tank was first introduced, the Panzer II was widely regarded as a platoon commander’s tank, while it was also employed to provide support to the more antiquated Panzer I. Despite the fact that the tank was largely outgunned and under armored by the outbreak of the war it actually performed quite admirably. It was powered by a 140 horsepower Mayback petrol engine, and featured a new suspension system that consisted of five large independent road wheels, which provided a smoother ride than previous tanks.

While it weighed ten tonnes and was far heavier than the Panzer I, it was fast and more powerful and could reach a top speed of 30mph. Its main gun was a 20mm cannon that was a converted aircraft gun, while a 7.92mm Maschinengewehr 34 machine gun (MG34) was also mounted coaxially with the main gun.

What it lacked in firepower, it made up for in numbers and speed, where groups of Panzer IIs could encircle enemy units. Used in this way, the Panzer II proved effective in the campaigns in Poland, Denmark, Norway and during the Blitzkrieg into the Low Countries and France—largely in part because apart from France none of those nations actually had much in the way of an armored force and lacked adequate anti-tank weapons. A total of 955 Panzer IIs were used in the Battle of France in May 1940, according for almost half of Germany’s entire tank force at the time.

Even by 1940, the Panzerkampfwagen II was largely outclassed and it was later relegated to more of a reconnaissance role, where it was used to good effect. It went on to serve in North Africa and even was used in the Eastern Front during the invasion of the Soviet Union. The Panzer II remained in front line service until 1943 when it was then employed largely in internal security duties in less active locations.

Production of the tank ceased completely in 1944, but the Panzer II chassis was used as the basis for other German World War II era armored vehicles including Wespe self-propelled gun and the Marder II tank destroyer.