Hey, Joe Biden: Where Are The Jobs? 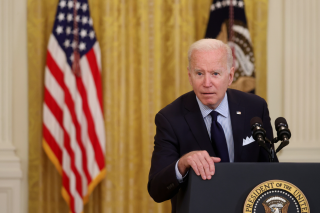 Friday’s disappointing jobs report unleashed a torrent of criticism that record extended and expanded unemployment benefits are keeping American workers on the sidelines of the economy: “‘Why is anyone surprised that the jobs reports fell short of expectations?’ Sen. Marco Rubio (R., Fla.) tweeted on Friday. ‘I hear from #smallbusiness everyday that they can’t hire people because the government is paying them to not go back to work.’” Congressional Democrats defended the expanded benefits, and the president responded meekly that “the impact of unemployment benefits on labor markets was ‘nothing measurable.’”

Now, to promote more and faster returns to work, some states are starting to opt out of paying extraordinary federal unemployment benefits, which are otherwise payable into September under the $1.9 trillion American Rescue Plan enacted in March. But regardless of whether those benefits are contributing to disappointing jobs figures, the latest jobs report reflects a bigger problem for stimulus supporters: The job creation engine they promised is so far not living up to their projections. If that continues, it could reprise the “where are the jobs” attacks that proved politically devasting when the 2009 stimulus legislation fell millions of jobs short of supporters’ promises.

U.S. President Joe Biden speaks during a a ‘Help is Here’ tour event to tout the 1.9 trillion American Rescue Plan Act law on the 11th anniversary of the Patient Protection and Affordable Care Act (Obamacare) legislation being signed into law, as he visits the James Cancer Hospital and Solove Research Institute in Columbus, Ohio, U.S., March 23, 2021. REUTERS/Leah Millis

It’s important to note that significant job gains were expected this year even without further trillion-dollar stimulus legislation. On February 1, the nonpartisan Congressional Budget Office (CBO) projected that even without further legislation an average of 521,000 jobs per month would be created between the fourth quarters of 2020 and 2021. Those 6 million jobs would result from the continued recovery from the pandemic as well as the significant bipartisan stimulus enacted in December 2020.

On February 3, White House economists cited an analysis by Moody’s Analytics that projected the administration’s then-proposed American Rescue Plan would create an additional “4 million jobs in 2021” compared with the “baseline without additional fiscal stimulus” described by CBO. That suggests the White House believed that under their American Rescue Act there would be 10 million more jobs at the end of 2021 than there were at the end of 2020.

Where are we now? The latest jobs report indicates payroll employment was 144.3 million in April — an increase of 1.8 million in the four months since December 2020 or an average of about 450,000 new jobs per month. That is slightly below the 521,000-jobs-per-month pace forecast by CBO without further stimulus. And job growth significantly decelerated in the month after the American Rescue Plan became law — declining from 770,000 jobs created in March to just 266,000 in April. That trajectory needs to reverse quickly for the US to reach the 10 million net new jobs mark projected by American Rescue Plan supporters. Indeed, to hit that mark, the US would need to create over 8 million jobs in the next eight months — an average of more than 1 million jobs per month.

It’s early into the implementation of the American Rescue Plan, and there’s always risk in putting too much stock in a single month of economic data. But the fact that job growth declined following the enactment of the administration’s first trillion-dollar stimulus plan is not a good sign — both for American workers and the prospects for the additional trillion-dollar spending plans the administration has proposed.  After all, if the jobs promised under the administration’s first stimulus plan are already falling short, why should their promises of millions more jobs supposedly created by their next “jobs plans” be any more credible?